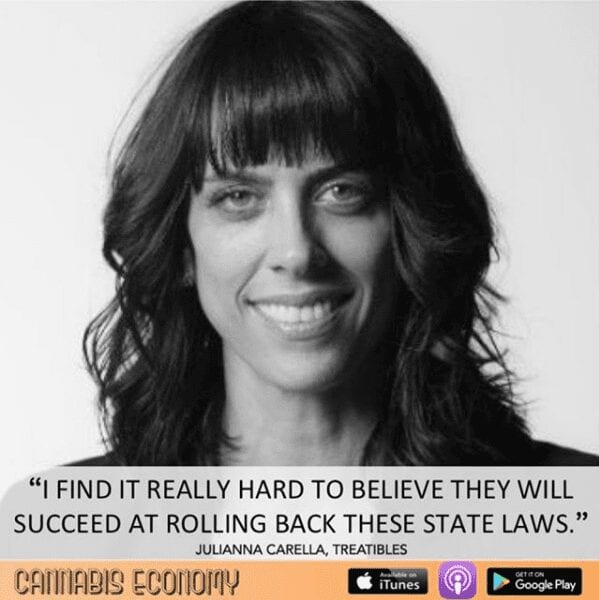 With the Capitol Corridor train in the background and a very personal point up front, Julianna Carella returns to discuss Auntie Dolores and Treatibles. In the wake of California’s new regulations, she’ll be shuttering Auntie Dolores edibles to focus on Treatibles exclusively. Julianna certainly understands and appreciates the two steps forward, one step back reality of legal cannabis, but at this moment in time she has evaluated other realities- slim margins on high-end edibles and the raid preparedness nature of California dispensaries. With those points, adding potency and serving size requirements in the new regulations make continuing with edibles untenable for her. That said, hempCBDbased Treatibles certainly lives on.

Speaker 1: Julianna carella returns with the train in the background and a very personal point upfront. Julianna carella returns to discuss Auntie Dolores and treatibles in the wake of California's new regulations shall be shuttering Auntie Dolores edibles to focus on treatable exclusively. Juliana certainly understands and appreciates the two step forward, one step back reality of legal cannabis, but at this moment in time, she's evaluated other realities, slim margins on high end, edibles, and the rate compared to the nature of California dispensary. With those points, adding potency and serving size requirements in the new regulations make continuing with edibles untenable for her. That said, hemp cbd based treatibles certainly live on welcome to cannabis economy. I'm your host Seth Adler. Check us out on social with the handle can economy. That's two ends of the word economy. Julianna Carella,

Speaker 2: Julianna carella. Yeah, that's perfect. And I always never know if it's two ends and Juliana, I never know if it's two r's and I never know if it's two l's every time. Okay, here's the easy part. Yeah. My name is spelled Juliana, but it's pronounced Juliana. So there's two ends. Oh, Julie Hanna. And there's only one R and two l's in my last name. Just think care is the first four letters of my easy. These are both easy things to remember by. That's fantastic. You've thought about this before. That comes up a lot. It comes up often. Daily. Maybe so, but the whole thing is though we can't call you Juliana. I'd prefer if you didn't. Exactly. It's Juliana, Juliana, and uh, there's the train, the, you know, the kind of Jack London area train, but it goes all the way up and down. But specifically here the horn is a little obnoxious.

Speaker 2: Oh, a. and you have to be much closer and especially if you're with me because I'm very loud. Got It. Um, and I'll tell the sound man, no matter who he is, he happens to be me in this case, but usually if it's a sound man, I'm like, I'm the loudest person you've ever dealt with. And the guy's like, okay. And then he's like, yeah, you are. Every time it happens I don't. Well, do you think that that's like how much of that is based in me personally versus New York versus, I don't know, something else might have a heavy New York accent. No, I don't. I know. Well, I made that decision. I would imagine roughly around the same time you decided on Juliana, unless that was apparent. Was that apparent? That decided to mean if you really want to know. My real name is Julie Anne with an e at the end? No. What was it, the dancing that gave you the Juliana sort of? Yeah. One of my dance teachers in high school started calling me Juliana and that's when everybody else started calling me that. Okay, so how has that sort of. That's exactly right.

Speaker 3: Yeah. Well, and there's more details, more details and how much you want me to go into this, but let's do it. Why not? We're here. How many times have I spoken to you? Not on Mike. Usually we talk off Mike. Yeah. So my parents' first child was a girl and she was named Julianne and she passed away. You've told me this not on Mike is what you've done now as you when you just said that. I remembered that. Okay. Yeah, so when someone else like inadvertently changed my name, I kind of just went with it because I wanted my own name and you even saw the headstone, if I remember correctly, to go visit her grave site when I was a little girl and I'd see my name or I thought it was my name. Anyway. Crazy crazy thing of Catholic. Yeah, I mean I wouldn't know and that's a good thing. Most people don't take their infants to the grave site to view there

Speaker 2: dead sister's grave site. My father, yeah. My father once told me that his father, because his father, cause my dad told me that he didn't do great in school and it was when I was not doing great in school so he's trying to empathize with me and then I used that as an excuse and so he called his father and he, his father said, well you don't have to tell them everything so they didn't have to tell you. They didn't have to bring you to the thing there. So Juliana is just a little bit more welcomed in every way.