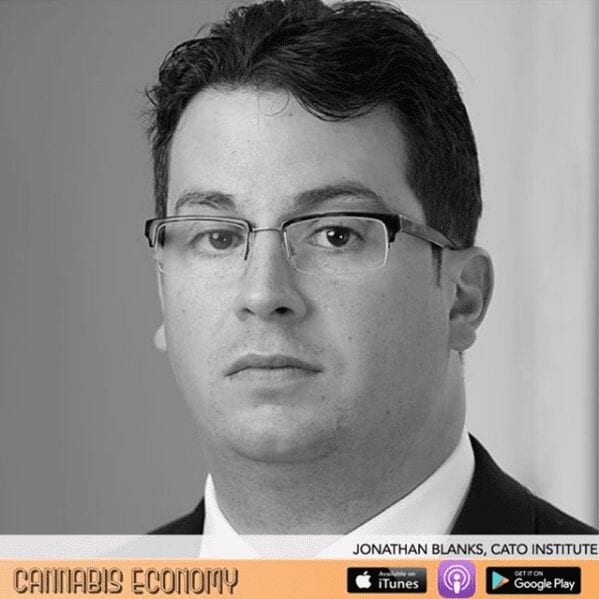 Recorded on the day of the Cole & Ogden Memo’s rescission, Jonathan Blanks from the Cato Institute joins us and shares that from his vantage point, the Sessions Memo reverses a very sane practice of limiting the federal government’s power to intervene in state legal cannabis. In his words “the people of Colorado think we’ve spent too much money, wasted too much energy and jailed entirely too many people for smoking marijuana, so we’re not gonna do it any more, the federal government shouldn’t come in and interfere with that.” So that puts us in a place where the voters asked for legal cannabis but instead of tax dollars from that industry going back to building that community, that communities tax dollars are being used in enforcement against the very will of we the people.

Speaker 1: from the Cato Institute, Jonathan blanks recorded on the day of the colon, Ogden memos, rescission, Jonathan blanks from the Cato Institute joins us and shares that from his vantage point. The sessions memo reverses a very sane practice of limiting the federal government's power to intervene in state legal cannabis. In his words, quote, the people of Colorado think we've spent too much money, wasted too much energy and jailed entirely too many people for smoking marijuana, so we're not going to do it anymore. The federal government shouldn't come in and interfere with that in quotes, so that puts us in a place where the voters asked for legal cannabis, but instead of tax dollars from that industry, going back to building that community, that community is tax dollars are being used in enforcement against the very will of we the people. Welcome to cannabis economy. I'm your host Seth Adler. Check us out on social with the handle can economy. That's two ends in the word economy. Jonathon blank

Speaker 3: can't do a project on criminal justice.

Speaker 1: Okay. The Cato Institute's project on criminal justice. Why would I be talking to you about cannabis? Why is that in your realm? I guess?

Speaker 3: Well, we had Keto are constitutionalist and we believe that the constitution means what it says and one of the things that that encompasses is the enumerated powers of the federal government related to the state powers of the police powers of the state. The sessions memo released today reverses the Obama Administration was a very insane practice of limiting the federal government's power to intervene in a marijuana in the states where it's legal. This is a great policy because the state should be able to govern what goes on within their states. If Colorado says they, the people of Colorado say, we think we've spent too much money and wasted too much energy and jailed entirely too many people for smoking marijuana, and so we're not going to do it anymore. The federal government shouldn't come in and interfere with that and unfortunately the memos that were rescinded today basically invite us attorneys all across the country, particularly where marijuana is legal to go in and in fact mess with what the Democratic people of the states have said,

Speaker 4: you know, there are laws in place aside from that, the voters asked for this and now we're going to go ahead and send in the federal government to overrule not only law, but you know, the conscience of the people.

Speaker 3: Absolutely. And the thing is, is like the cabinets out of a bag. It's not that the Department of Justice is going to be able to stop legal marijuana, they just don't have the resources for that, but they can, they can chill business and they can, uh, make it, make it harder for people to do this legally and above board the because they can send cease and desist letters to a marijuana dispensary operators or the landlords and say, you need to stop this or we're going to come after you. And so a lot of people who were trying to do the right thing, trying to, you know, make sure it doesn't go to criminal elements, doesn't cross state lines, doesn't go to kids are now saying, nope, we're going to use all this evidence that you were doing the right thing against you in a federal court and that that's absurd because they can't go into federal court and say, Hey, it's legal under state law. Federal government doesn't care. And so it's not a defense. And so you're talking about taking legitimate business people to court for just trying to make an honest living right

Speaker 4: while we're here, you know, the solution is to well have memos like we had, which now those have been rescinded. So the next solution, as I understand it, is simply to do something about the controlled Substances Act within Congress. Is that right? As far as the only solution that we have,

Speaker 3: basically, I mean there's a robot or Blumenauer amendment that currently protects a medical marijuana dispensary that says that the federal government, the Department of Justice cannot spend money on state legal, medical marijuana products.

Speaker 3: Oh, right, right. Absolutely. It doesn't affect that they came in after the effect of the Ogden memo, which was rescinded today, which said that the doj was not going to prioritize that right now. Unfortunately we don't know if it's going to make it into the next budget deal. Right now we're about. Your Blumenauer is only as good as you know, is only good until January 19th and so hopefully it will make it in the next one, but you know, we don't know because all the log rolling has happens in Congress. So yeah, there are different things that can be. You can amend it so that you move marijuana and schedule two or or or reschedule it so it's no longer scheduled one and there's no federally recognized medical purpose for it. Or as a representative. Tom Garrett, who is a Republican prosecutor from Virginia of all of all places, said just the schedule it all together and that that would still leave it to the states. States can ban it if they want to. Federal government can still get involved in interstate commerce if they wish, but that will leave it to the states. But yeah, outside of legislative action right now, the DOJ is completely empowered to do what it's doing.