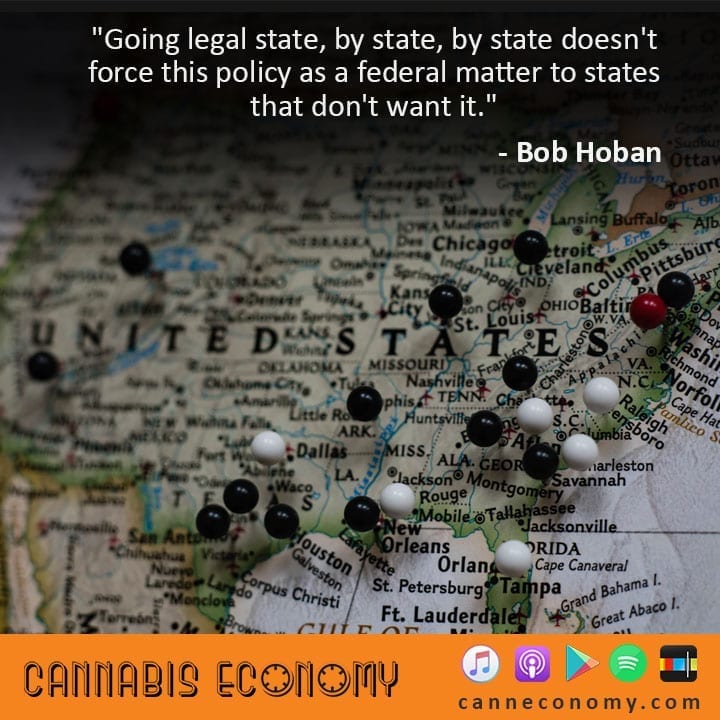 Bob Hoban returns and shares possible ways forward: “Now, you go forward with the excise tax. That’s an example of how the federal government might swallow this legalization notion better. Because, all of a sudden, the dollars that would disappear because the 280E exception, under tax law, prohibits companies from taking the vast majority of expense deductions.”

Speaker 2: The other real cool thing, we did do an agreement with [Dr. Ben Cohen 00:00:18], who's a pain specialist, that is helping us design a pain formulation cream that will be used for athletes. I don't know if you are aware that ... Obviously, I mean, this was I guess kind of old news, but WADA and USADA has both taken CBD off of the list of prohibited use items. So, we're going very heavily now after pain products for athletes, and Dr. Ben's going to help us with that project, as well.

Seth Adler: Here I am, back at Hoban HQ.

Seth Adler: Yeah. Thanks for having me.

Seth Adler: Congratulations on the Eagles.

Bob Hoban: It's a big victory. We worked hard all year. I was in the weight room since before you can imagine.

Seth Adler: And, we did it, right?

Seth Adler: I don't if this was ... Because, you kind of moved offices here. Was the Pete Rose in Philadelphia Phillies uniform and signed picture in the other office?

Bob Hoban: It was, it was indeed.

Seth Adler: I must have missed it.

Bob Hoban: Yeah. We're going to have to get a Nick Foles picture in here soon.

Seth Adler: These are things you know.

Seth Adler: Yeah. There's other things you know. We want to make sure to kind of cover them. First things first, we had a little bit of a change here as far as the Attorney General rescinding the Cole and Ogden Memos.

Seth Adler: I just wanted to get your sense, as an attorney, as a guy that's been in the industry for quite some time.

Seth Adler: When that happened that morning, I think it was the Thursday of the first week of January, what were your immediate thoughts?

Bob Hoban: It was January 4th.

Seth Adler: Yes, it was.

Bob Hoban: I remember it like it was yesterday.

Bob Hoban: No, this was ... Let's put it this way, the Attorney General is right.

Seth Adler: Yes, he is. Sadly.

Bob Hoban: The Attorney General ... The US Attorney, Jeff Session, is charged with enforcing federal law.

Seth Adler: Mm-hmm (affirmative). He's been saying that all along.

Bob Hoban: All along. He's right that, guess what? Congress has to act.

Bob Hoban: We can't continue to blame someone like Jeff Sessions, although his policies are not something that I agree with, and I think most of the industry I think would disagree with.

Seth Adler: Most of the voters, as well.

Bob Hoban: At the end of the day, he's correct about this in that Congress needs to act. At some point, they need to act beyond simply passing these stop gap spending mechanisms where they say, "Department of Justice can't do this, or can't do that with their dollars."