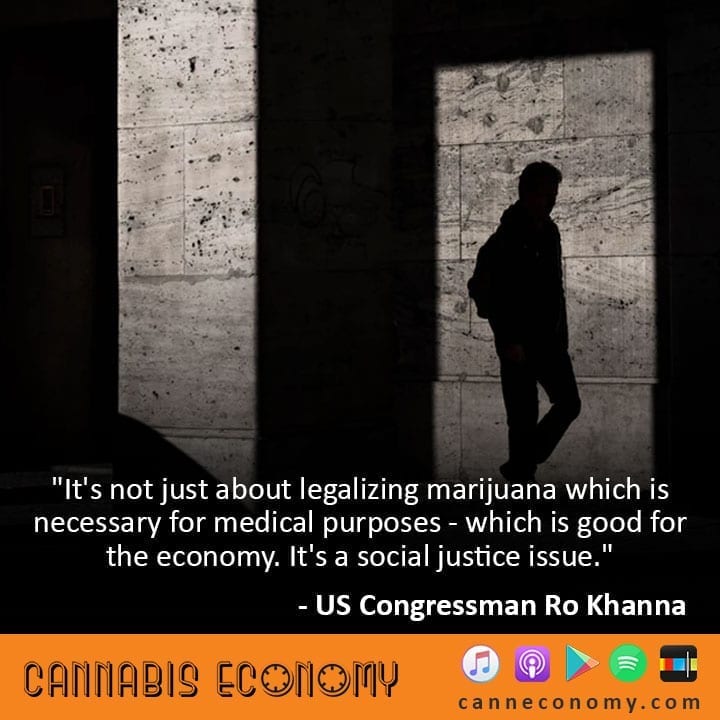 Congressman Ro Khanna looks at the medical, economic, and racial justice issues of cannabis legalization. The Marijuana Justice Act addresses these issues by expunging convictions and removing cannabis from Schedule I. In general, Khanna sees Cannabis as one of those issues where a majority of the american public wants something that Washington isn’t doing, leading to frustration and anger about the failures of the democratic process. The changing House and possible presidential change in the near future provide opportunities for faster and more effective implementation to remedy this.

Seth Adler: All right, so here we are back in Cannon. Congressman Ro Khanna. How are you?

Seth Adler: So it's been a minute, it really hasn't even been that long since we spoke, but since then there's been a tremendous amount of change in Washington DC, and oh yeah, there was a G7 nation that legalized cannabis in every way.

Ro Khanna: And a huge shift in public opinion now in the House in the Democratic party. When I started advocating for the legalization of marijuana, it was seen as a fringe opinion, as somewhat out there, progressive.

Ro Khanna: Yeah, exactly. And Barbara Lee and I proposed with Cory Booker, the Marijuana Justice Act, which the point we made is it's not just about legalizing marijuana, which is necessary for medical purposes, which is good for the economy, it's a racial justice issue ...

Ro Khanna: ... that millions and millions of kids lose their future because they develop criminal records and if they're black or brown they develop these records, and if they're white suburban kids, they don't. And for doing the same exact thing. So we passed or we introduced the Marijuana Justice Act to expunge these convictions and to legalize marijuana, take it off the Schedule I drug, and we had maybe 10-15 cosponsors. Now I believe we're gonna have a lot more momentum for this.