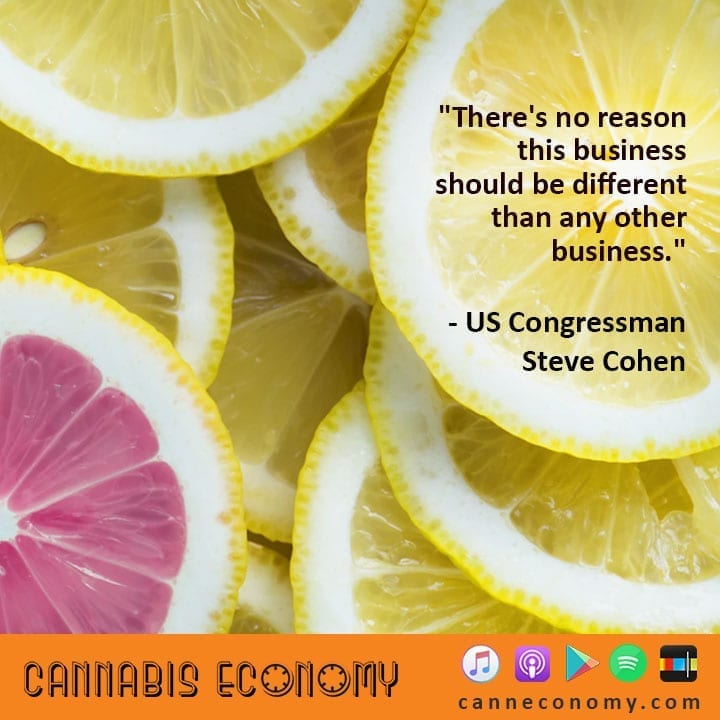 Steve Cohen talked about how the next congress is likely to handle everything from cannabis to healthcare, infrastructure, job creation, ethics, and education. Decriminalizing cannabis and keeping it relegated to states issues is looking increasingly possible with all the new bills coming in. Cohen has supported and even created similar legislation for decades, before it was mainstream, and continues to be at the forefront of the issue.

Congressman Steve Cohen, thank you for having me here in the Rayburn room.

Steve Cohen: Named for the speaker that was probably as effective as Nancy Pelosi.

Seth Adler: Okay. All right. So pretty good, is what you're saying?

Seth Adler: He was from Texas?

Steve Cohen: He was from Texas.

Seth Adler: You're from Tennessee.

Steve Cohen: And if it weren't for Tennessee, there wouldn't be a Texas.

Seth Adler: And please explain that real quick for me because I always need to be educated.

Steve Cohen: GTT. A lot of Tennesseeans picked up and left, and that meant "Gone to Texas." And a lot of people, including Davy Crockett and Sam Houston went to Texas, and they fought at the Alamo, and they fought after the Alamo, and they made Texas not a part of Mexico, but a part of the United States, first as its own sovereign nation where Sam Houston became president, and eventually part of the United States.

Seth Adler: Interesting. Are you a historian of sorts?

Steve Cohen: Well, I majored in history. I wouldn't say I'm a historian, but-

Seth Adler: Okay. This is the old work.

Seth Adler: The new work, right? Here we go. We've got a new Congress coming in. What are the issues ... We of course have to talk about cannabis. The show's called Cannabis Economy. But what are the issues that actually, action can happen with in this next Congress?

Seth Adler: Well, first with cannabis, and then everything else, as well.

Steve Cohen: Well, everything else first.

Steve Cohen: And everything else is going to be trying to protect people's healthcare, the Affordable Care Act, lower prescription drug prices, infrastructure bill that helps really the backbone of our economy, roads and bridges, and all the ways and airports, how we get goods to market. It creates jobs. And then helping clean up the culture that we've got here, that we've seen under the Trump Administration, of corruption and trying to have stronger ethics laws concerning the president and the president's cabinet and requirements of disclosure of tax returns, requirements of disclosures of conflicts of interest, and prohibiting conflicts of interest and making them strong. And then of course we're concerned about education. So those are the basic issues.
Voting rights is important. I'm going to be on Judiciary Committee. We'll be considering about voting rights, and looking into the president's misconduct, including the emoluments clause, obstruction of justice, other actions that he's undertaken that are prohibited by our laws.

Steve Cohen: We can can and I think we will have a much better chance at getting bills to the floor that can make it a state law and not a federal law, decriminalize it basically on the federal level, like alcohol, and leave it up to the states to decide whether or not it should be legalized in their jurisdictions for either medical or personal, quote unquote, recreational use.

Seth Adler: There's the States Act, which is called the same thing in the Senate and in the House, obviously two different bills, because that's the way you've got to do it, but that deals with 280E so that I can deduct my business regularly, meaning any cannabis business, and of course, it solves some of the banking issues. What's the viability of that actually coming out of the house and being sent to the Senate?

Steve Cohen: I think there's a good chance for that. There's no reason this business shouldn't be any different than any other business, and particularly where it's been legalized in quite a few states now, from medical, which is a business, and whether it's medical or recreational. And I've never understood why it's called recreational. We don't call alcohol recreational alcohol.