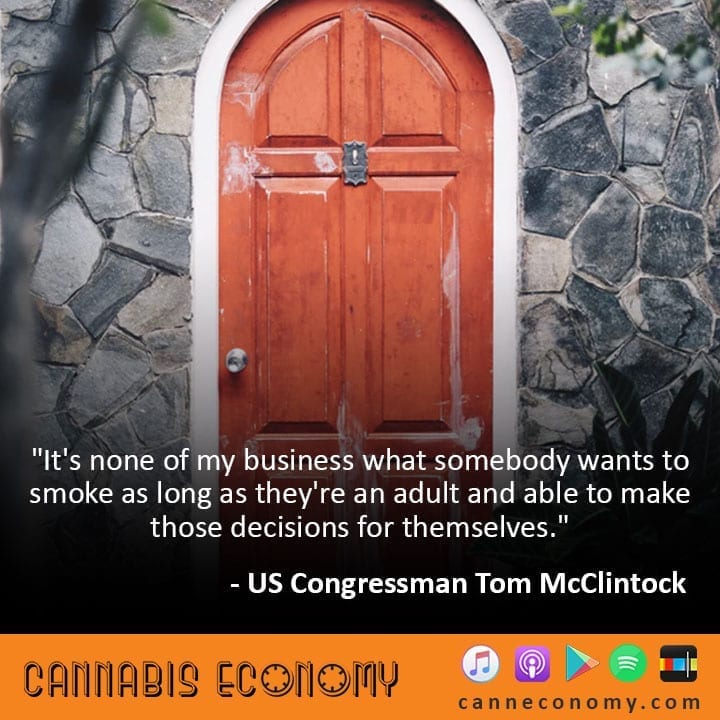 US Congressman Tom McClintock returns to talk about his views on various legislative items relating to cannabis. These bills are not only promising for businesses and productivity of the country, but also support the freedom of individuals to weigh risks and make their own decisions without federal government interference. However, there is still significant push-back from many members across the isle on what he believes should not be a partisan issue.

Speaker 2: Entourage effect, I mean, is interesting. I think entourage of course is alluding to the idea the number of terpenes and other cannabinoids and sequest terpenes and things in the plant, and that we really don't know what all of those things do. So we want to try to get the most benefit out of them.

Speaker 2: I think we're really going a step further than that. We're taking what we can get out of science, choosing the cannabinoids that we want purposefully to put into the products that we're creating, and then we're compounding those with other of the botanical ingredients that are beneficial. So for example, the intensive body oil that we produce now has collagen and rosacamena in it for scar reduction. So really looking more to create products that are purposeful rather than just simply a cannabinoid in a base.

Seth Adler: You are sitting. Sitting Congressman here for the great state of California, and podcast land knows no time. But I'm here on an interesting day. This is kind of move out day or move out week as we make our way into this next Congress. And I'm here to talk about cannabis legislation, right? So I don't care who's coming in and who's going out, as long as you have a sensible approach to cannabis.

Tom McClintock: It came a lot closer than we thought though.

Seth Adler: As you look to the next Congress, I guess the easy question is do we know who replaces Polis on that namesake amendment if you're going to reintroduce it?

Tom McClintock: I haven't had any discussions yet. But I'll certainly want to reintroduce it either as a sponsor or a cosponsor.

Seth Adler: Okay. Excellent. And what it does is it protects ...

Tom McClintock: It gets the federal government out of the business of regulating marijuana in intrastate sells.

Seth Adler: Because why would they, right?

Tom McClintock: It's locally grown, locally distributed, locally consumed, and therefore out of the per view of the federal government's attention or at least its powers.