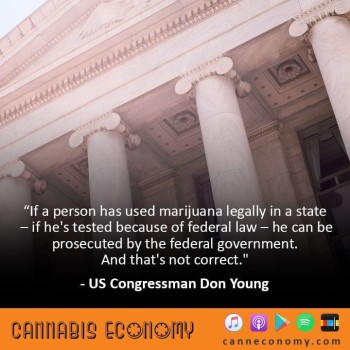 Congressman Don Young, soon to be the longest serving Republican House member in history, discusses the ins and outs of cannabis legalization from an Alaskan Republican perspective. He sees the need for more debate on the issue to sort out and solve some problems, which the STATES Act provides the opportunity to do. With the support that legalization has with the public, it gives the chance to bring people together and provide benefits regarding agriculture, medicine, crime rates, and business.

Seth Adler: U.S. Congressman Don Young joins us. Welcome to Cannabis Economy. I'm your host Seth Adler. Download episodes on Canneconomy.com. That's two N's and the word economy.
First, a word from MedMen, and then U.S. Congressmen Don Young.
MedMen continues to expand it's footprint on the cannabis landscape, opening new stores in Los Angeles, Las Vegas, and the iconic Fifth Avenue in Manhattan. They've also opened a 45,000 foot high tech cannabis cultivation and manufacturing facility in Nevada. The company has reached $1 billion valuation, making it the countries first cannabis unicorn, and it's just the beginning. Learn how MedMen is building the future of cannabis today at Medmen.com.
We're in an office here, Congressman Young, where there are ... I mean, your wife is here, and that's wonderful to see. You've got a couple staff folks here. But there are many more eyes that are around.

Don Young: Really? Are these the dead eyes that you're talking about?

Seth Adler: The dead eyes. It's stunning. How many ... What are we doing here?

Don Young: I think there's 38 heads in this office. We got about 30 in the other office. So, like I say, if you don't like dead eyes, don't come to my office.

Seth Adler: Fair enough. And as far as a decision making joke here in Washington D.C., is there something that goes, "If these guys could vote," or something?

Don Young: I don't know. I think they would all vote for me because I was very merciful. Everyone in this room was taken with one shot.

Seth Adler: With one shot. That's you.

Don Young: And I always thought, and I pride myself. I mean, still able to shoot. I've been shooting since I was five years old.

Don Young: And I was raised on a ranch, and my father offered me a 22, which I took, pump action 22 and a box of ammunition. He says, "Now you're shooting for the table. Let's remember everything you shoot, we got to eat." Well, I made a big mistake. I shot a mud hen or a coot you call it. It's a sea bird.

Don Young: And I picked it and I cleaned it. I was part of it, and my mother cooked it. But it's the worst thing God ever created, and I learned a lesson. I make good and sure anything I shoot is good to eat.

Seth Adler: You got to know what you're shooting.

Seth Adler: And you got to eat it. So what would Dick Cheney do, right?

Don Young: Dick got a bum rap on that. Both people were involved in that. The gentlemen he shot was wrong because he got out of position, didn't clear it with Dick, and Dick of course made the big mistake of locking his eyes on the bird. He was shooting quail. Quail shooting is the most dangerous of all sport's shooting. That little bird causes more damage by hunters to hunters than any other bird because of that. I actually was on a hunt where a guy got shot in the chest with 28 shots, bullet pellets. Knocked him down. Didn't die. But I learned something too. They didn't take him out either. They just let them come out in time. So anyway, that's not what you're here for.

Seth Adler: When you're not hunting, maybe it's safe to say that you're either in Alaska or here in Washington D.C. for 40, how many years?

Seth Adler: And the Cannon Building is named after him.

Don Young: Named after him. They're not going to change the name of the building after me. But they did him.

Seth Adler: Okay. And why is this do you think? Maybe a little too much free thinking, Don, is that what it is?

Don Young: Well, I don't know. To be honest with you, I've always prided myself in being an independent thinker and pretty much telling everybody what is reality instead of fiction and it's got me in trouble sometimes. But we have a tendency to be politically correct all the time, and sometimes in doing so, you don't convey the real truth of the matter. And so I know I survived some tough elections and I survived some tough ones. But I've always been pretty prideful of our ability to get the job done, and we run for office, it's up to the voter. Our contract comes up every two years.