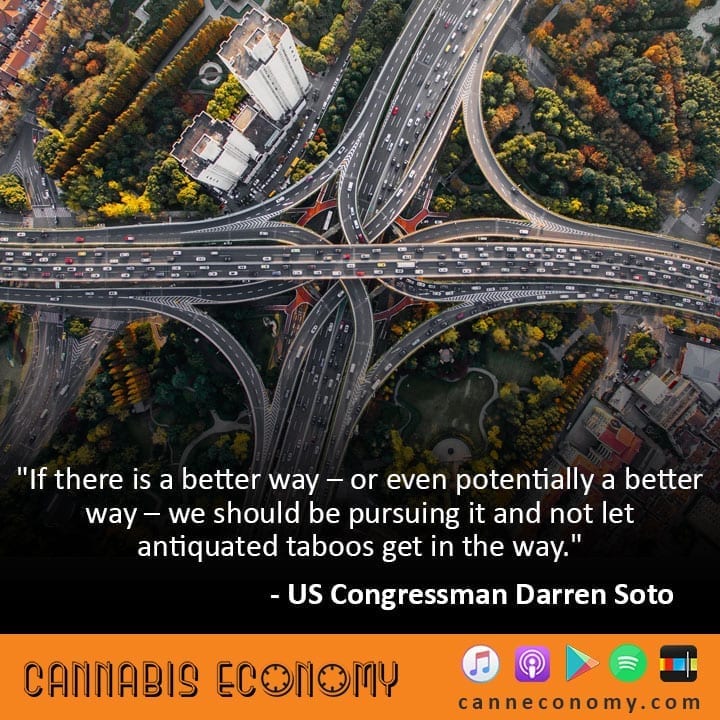 Darren Soto discusses big changes happening of late. While previous years have been difficult in terms of passing legislation, the new democratic congress brings with it a more positive outlook. The change gives legislation like the Farm Bill and STATES Act greater possibilities to pass. Darren covers the reasons why legalization is something to continue fighting for in the face of antiquated stigmas, poverty, even more harmful prescription drug alternatives.

Audio Ad: Wanna know with Wana Brands? As far as the cannabis economy global landscape, it really is starting to feel like Colorado in 2009.
Almost every single day you read an article about a new country that is legalizing or thinking about legalizing, and so we're starting to see some widespread action in Europe, South America, just all over the globe we're really starting to see everybody open themselves up to the positive possibilities with cannabis.

Darren Soto: Thanks for having me.

Seth Adler: Yeah, absolutely. Really excited to talk to you again, because things have changed.

Darren Soto: Sure. We have a new Democratic Congress coming in. There's even been some new legislation proposed that was more in a compromised basis in this Congress, but I think we have even greater possibilities next Congress. Just to quickly summarize to get up to speed, as you may know, we sponsored in a bipartisan basis with Congressman Matt Gaetz a bill to lower the schedule to Schedule II. Certainly I don't think it should be even at Schedule II, but it's a start. Then there's been bills filed by Congressman Blumenauer and others to address the banking issues. Those were the subject of some pretty high flying debates in the Rules Committee. They unfortunately were not successful.
Soon to be Governor Polis of Colorado obviously had a big part in that. Then more recently we put forward bills to allow for the VA hospital and other hospitals to start utilizing medical cannabis for research. That bill was styled as more of a bipartisan one. That was before it was apparent that we'd have a new Congress, a new Democratic majority coming in. But I think it's safe to say next year we should have a better chance of passing many of these things in the House, and then it'll be interesting to see what the Senate does.