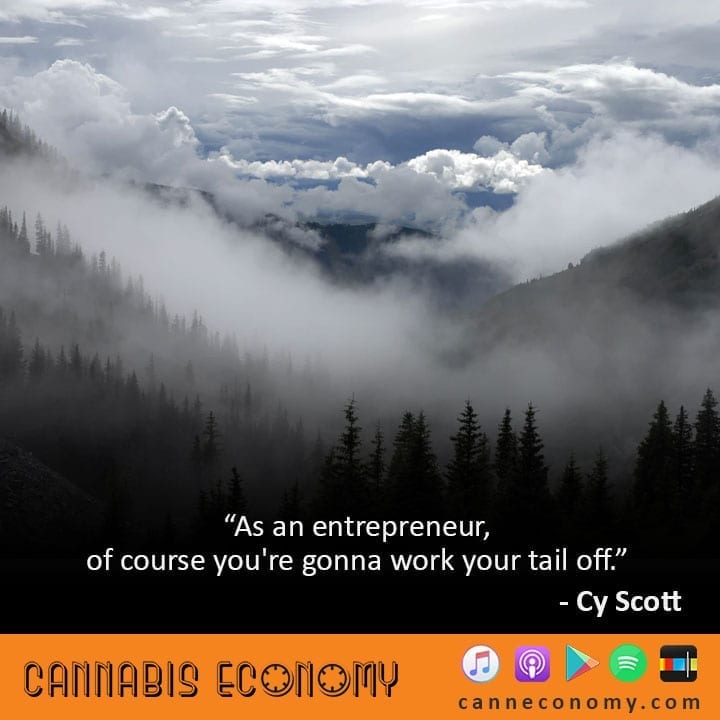 Cy Scott covers the normalization and de-stigmatization of cannabis from a data and analytics perspective. Increasing entrepreneurial tendencies in the industry have built up business through partnerships across the country, focusing on improving how retail systems work and how they interact with customers. The cannabis industry has unique opportunities for testing new ideas and new systems to really optimize the business side of things.

Seth: Cy Scott joins us. Welcome to Cannabis Economy. I'm your host Seth Adler. Download episodes on Canneconomy.com. That's two n's and the word economy, or wherever you get your podcasts. For a word from Wana Brands. And then Cy Scott.

Seth: Wanna know with Wana Brands. Nancy will be talking about global expansion. And really other industries are starting to realize that cannabis is really an industry of innovation.

Nancy: Yes. Um, I think that's gonna be one of the major trends that we're gonna see over the next couple of years is ... somebody said to me recently that we're moving from gross science to grow science. Which I love. But I think that, we're getting a lot more sophisticated about the plant itself, how to extract more specifically, how to separate the various terpenes and cannabinoids and how to recombine them in different ways.

Nancy: Additionally, you're gonna see a lot of people working for different ways to increase bio availability, to make sure that more of the THC and other substances from the plant get into the body efficiently, so I think just in terms of the plant itself, we're seeing a ton of innovation. And then I think we're seeing a lot of innovation from ancillary businesses that support.

Cy: Get a headset.

Seth: Yeah so, but here's the thing. I mean that is your current deal, you know. You also started something else, I mean you're one of these guys, you're already have done like a big thing, now here's another big thing.

Seth: In this space.

Cy: Yeah. So, uh, in 2010, myself and my two partners, co-founders, Scott Vickers and Brian Wansolich started Leafly. You know, it was very much ... we were in California at the time ... very much an opportunity that we saw. We started going to dispensaries, we saw this number of strains on the dispensary shelves.

Seth: 'Cause you're just supposed to know.

Cy: You know, they would recommend, "People seem to like this." And you know, you'd try some different strains and some would make you pretty sleepy and some wouldn't, and we thought there needs to be a place where people can share this information and if we want to create something like that, we came from the consumer internet world, startup world, we wanted to create something that, you know, would resonate with us as an audience. Little more mainstream, and that became Leafly. And we really wanted to de-stigmatize and kind of normalize cannabis. We saw this trajectory of consumption and acceptance and we thought, you know, this is a normal thing, right?

Cy: Meaning Canada. The medical bill. Is that what you're talking about?

Seth: And the New York Times had just, at that point ...

Cy: Is that what the ad was was congratulations to New York?

Cy: 'Cause I don't remember that. I just remember it being very, lot of white space. Right?

Seth: And it's that, you know, had the mention of the medical bill that had passed. And the New York Times had just taken the editorial position that cannabis should be legalized.

Seth: For adult use and nationwide.

Seth: Yeah. Exactly. Exactly. So, that's kind of how we got our start in the space.

Cy: Yeah. I've wonder what ad I saw that wasn't that ad.

Cy: Because I'm thinking about something else I guess.

Cy: Now there are. Yeah. My goodness.

Cy: So, okay. Let's talk about you as an entrepreneur.

Seth: Sure. Sure. So, yeah, before kind of jumping into the cannabis industry, I'd done a couple startups. Mostly, you know, tech, internet based, mobile games for a little while. You know, this is, like, pre-iPhone days, so old history ...

Cy: So you're ancient. Totally.

Cy: See, now I don't even know what you're talking about.

Seth: Nobody remembers those, like those old Nokias that came with Snake, that little game. See, you don't even remember.

Cy: Exactly. I remember that.

Cy: So, are you a computer scientist? What was the ...

Cy: So, you went for computer science.

Seth: At San Francisco State and then down Cal State Fullerton, so ...

Seth: Went there. So, always building stuff. You know, coming out of school with a computer science major when I did, you know it was really great, you could really create things, right?

Seth: It's kind of right on that wave of post internet one dado, and kind of moving into two dado, and so, it enabled us to do things like create Leafly.

Cy: Okay, so you see the opportunity. What year what is roughly?

Seth: When we started Leafly?

Cy: So, that's still before anything.

Seth: It was pretty early. There certainly were dispensaries and ...

Cy: If you just went and got a job anywhere.

Cy: As the computer scientist.

Cy: Why would you do that to yourself at that time?

Seth: I think it's just the entrepreneur story, you know. You see the opportunity and you wanna go for it.

Seth: Maybe. It's funny. A while ago on Twitter, there was a thread, some people were chiming in about entrepreneurs and kind of their, when they're younger, things they do that kind of indicate, like, okay, you're definitely gonna go down this path and I realized, I hadn't really thought about it, but I realized when I was a kid, I used to sell ... I'd take the school bus to school to you know, elementary and middle school and I would sell Jolly Ranchers, right? And I would just rake in all these quarters from Jolly Ranchers and I'd go and play Street Fighter or something. But it was a good hustle, you know, and all the other kids started doing it.

Seth: And then the school shut it down, right? 'Cause it's just all this commerce happening on the school

Seth: Exactly. But it kind of is that, okay, well maybe I'm a little broken in that way right? And see an opportunity and go for it.

Seth: Well, I mean, you know ... It's not the path most traveled I would say, right?

Seth: To go out and take those risks and go ...

Cy: Something's gotta be a little off.

Cy: Is what we're saying.

Cy: Or is it that something's gotta be little on?

Seth: Yeah, maybe. Maybe both. You just have to you know be prepared to do it.

Cy: My point being, and now, I'll take this tangent, you as an entrepreneur are allowed to speak your mind in a different way than someone that works for a you know, Fortune 500 company and just does the thing. You know, you can just kind of say what you want, do what you want, and you know, 10am, you're either in the office or not, but you're maybe working, or probably are, it doesn't matter, whatever ...