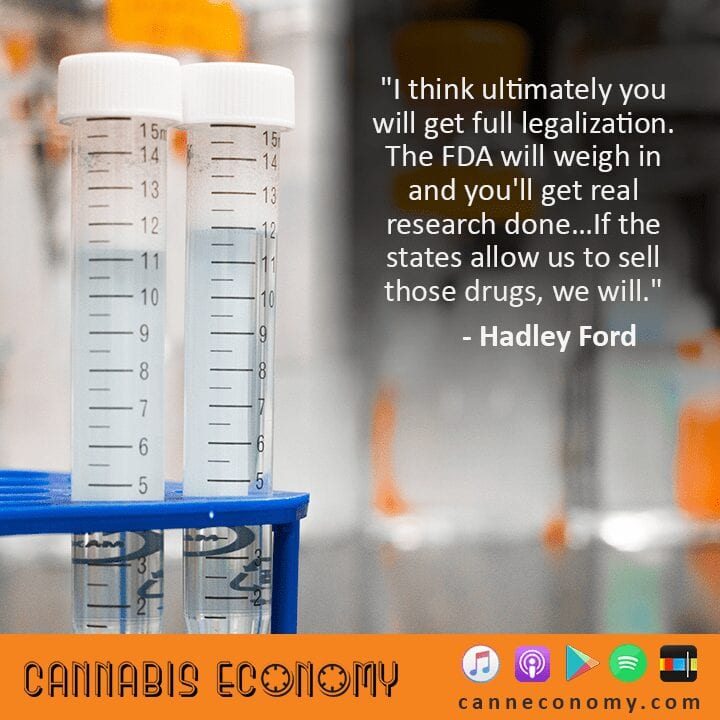 Hadley Ford joins us to shed light on his retail philosophy of delighting the customer in the cannabis industry: “If you’re doing your job right from retail perspective, they’re going to buy your product. And that product can either be a product that we own 100%, or it could be a third party product that we’re curating in that store. I think you have to have a balance of both because a consumer will say, ‘I want the choice. I want the selection. I’ve heard about this. I’ve heard about that.’”

Seth Adler: The dulcet tones of Hadley Ford. Now is this really ... I mean, Hadley Ford, that's quite a name.

Hadley Ford: It's a stage name.

Seth Adler: Is it?

Hadley Ford: Oh, sure. No, I just rented it for the whole cannabis thing.

Seth Adler: Exactly. You would be one of those suits that we used to talk about way back when.

Hadley Ford: You'd be surprised. I say it to my daughter now, "Man, you just got to stick it to the man." She looks at me and says, "You are the man."

Hadley Ford: Yeah. I got thrown out of college the first time around. Spent five years as a juggler and itinerate farmer.

Seth Adler: And you're not kidding, right?

Hadley Ford: I'm not kidding. No, no.

Seth Adler: The juggler thing, do you have Ringling roots?

Hadley Ford: No, no, no. I just have roots that I don't want anyone telling me what to do.

Seth Adler: We have that in common.

Hadley Ford: So the juggling thing, I was in college as a chemical engineer, and I got thrown out. And then I had to figure out some way to make a living, so I just hitchhiked around the world, and lived in communes and tents and street and taught myself how to juggle. And then randomly was introduced to the greatest juggler in the world while I was doing that. He gave me a whole bunch of tips.

Seth Adler: Who would that have been for juggling fans?

Hadley Ford: That was Dick Franco. In a bizarre twist, so that would have been 1979, -80, something like that down the streets of Oslo. And we hung out together for a week or two. He was performing in Oslo at some sort of outdoor club, and he was kind enough brought me in with his wife, his daughter and taught me all this stuff. I was no where near what he was. And then I never saw him again until last year, my old juggling partner Scotty said, "Hey, a friend of mine is using one of my dogs," because she's dog trainer, "in the Big Apple Circus. Do you want to go to dress rehearsal?" I said sure. I go to the dress rehearsal. After the dress rehearsal, I'm sitting next to some juggler and we're talking. And he's good friends with Dick Franco. I said, "I met Dick Franco once." He says, "Oh, Dick's not doing so well." Had some health issues. I said, "Put us in touch because I used to be in healthcare." He put us in touch, and I helped him out with that. 40 years later, payback comes around. He took some young kid off the street, taught him a few tricks, and I was able to pay him back 40 years later. What a strange world, right?

Hadley Ford: It wasn't kind of me. It was karma. It's the way the world works, right?

Seth Adler: That's it. It comes and it goes.

Hadley Ford: It comes and it goes, exactly.

Seth Adler: So I want to get back to how you got thrown out ... Yeah, exactly. Of college maybe later. That's why you chose your words ... I don't know how-

Seth Adler: -much you choose your words.

Seth Adler: You used to be-

Hadley Ford: With the press, especially.

Seth Adler: Yeah. And so when you say ... Well, I'm an anthropologist, just for the record, just to set you at ease. You said, "I used to be in healthcare," as opposed to being in healthcare now. Did I hear you wrong or would you rephrase that or is that how you see it?

Hadley Ford: Yeah. In the last business I was in, Proton Therapy, it's a very sophisticated way to oblate tumors and cancers. Another way you delight people is to make that mass go away and out on a walk or have a higher quality of life. The way we delight customers in this, there's a whole spectrum of desire that a customer wants. The same person who micro-doses for back pain on a Monday morning when they get out, someone like myself, old guy with a creaky back, is the same person who on Saturday is going to a concert with his or her friends and may want a little exhilaration. And the customer approach is the plant in that manner, so we as a company have to approach that plant in that manner and try to delight the customer across all those things because the states in their wisdom's have said, "You can only buy cannabis at one spot." So you have to ... I don't want to say you have to be all things to all people, but you have to be a lot of things to a lot of people, which is a much different focus than my last company, which was you've got a solid mass in your body and I got to destroy it.