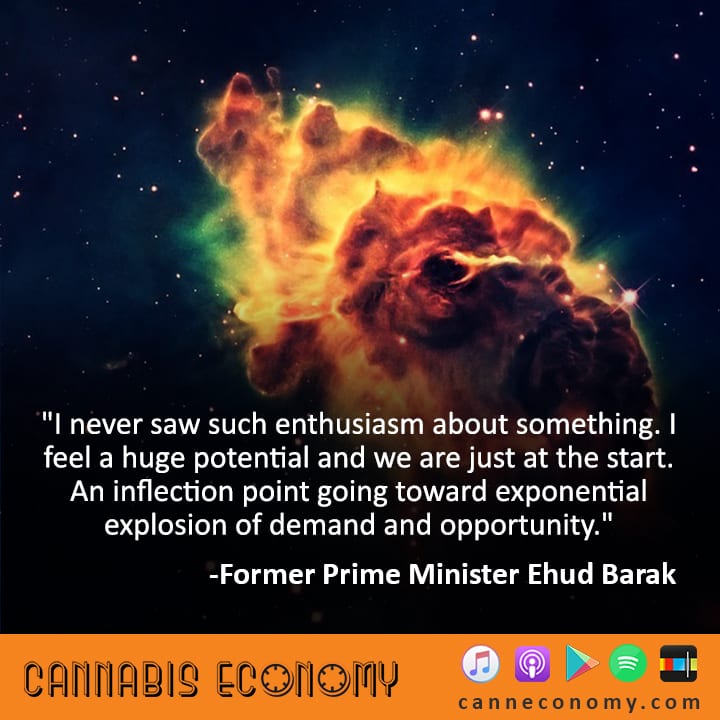 Former Israeli Prime Minister Ehud Barak joins us and shares his excitement for the forward momentum of Cannabis research: “It’s a huge world of science waiting for exploration. We have here highly disciplined growers. We have here top-quality scientific community, and a lot of interest. And we see it from day-to-day.”

Seth Adler: Former prime minister, Ehud Barak, joins us. Welcome to Cannabis Economy. I'm your host, Seth Adler. Download episodes on CannEconomy.com, that's two Ns and the word economy, or wherever you currently get your podcasts. CannEconomy.com has a ton of direct insight from policy, business and scientists in the space. First a word from MedMen and then former prime minister, Ehud Barak.

Speaker 2: MedMen continues to expand its footprint on the cannabis landscape, opening new stores in Los Angeles, Las Vegas, and the iconic Fifth Avenue in Manhattan. They've also opened a 45,000 foot high-tech cannabis cultivation and manufacturing facility in Nevada. The company has reached a one-billion dollar valuation, making it the country's first cannabis unicorn, and it's just the beginning. Learn how MedMen is building the future of cannabis today at MedMen.com.

Seth Adler: Former prime minister, Ehud Barak, thank you so much, sir, for your time.

Seth Adler: Can you hear me? Not so well.

Seth Adler: Exactly. Like a good politician, you already know what you're going to say. It doesn't matter what I ask.

Ehud Barak: That's not the question.

Seth Adler: The first question is why? Why cannabis? You were here at Canna Tech, and you mentioned that you don't smoke it, you don't even know what it smells like, so why is this interesting to you?

Ehud Barak: I was busy in cybersecurity and homeland security, public safety, and so, I approach my friend who told me, "Have a look into it." He gave me a book by our regular, the unit in the Ministry of Finance who regulates the cannabis industry-

Ehud Barak: Yeah. Yuval Landschaft. They gave me a book of 250 pages.

Ehud Barak: And I was fascinated. I dived into it. I have a background in science. I took some courses in molecular biology several years ago. So I found myself understanding what they are talking about, and fascinated by it. Then, later, I saw the people, and I saw that some of the founding fathers of the industry in Israel, [inaudible 00:02:21] Barak, and [inaudible 00:02:22], they are working for 10 years, and they also have a lot of idiosyncratic knowledge dealing with real patients for real indications, over years, thousands of patients.
I found the whole issue fascinating. Now, I know the hype that was about cyber in the recent years, but I never found such an enthusiasm. We spent some time in J.P. Morgan Healthcare conference in San Francisco several months ago, and immediate afterwards, in Davos, and I found it shocking. I never saw such enthusiasm about something. I feel a huge potential, which we are just at the start. An inflection point at the lower part of the F scale, going toward exponential explosion of demand and of opportunity.