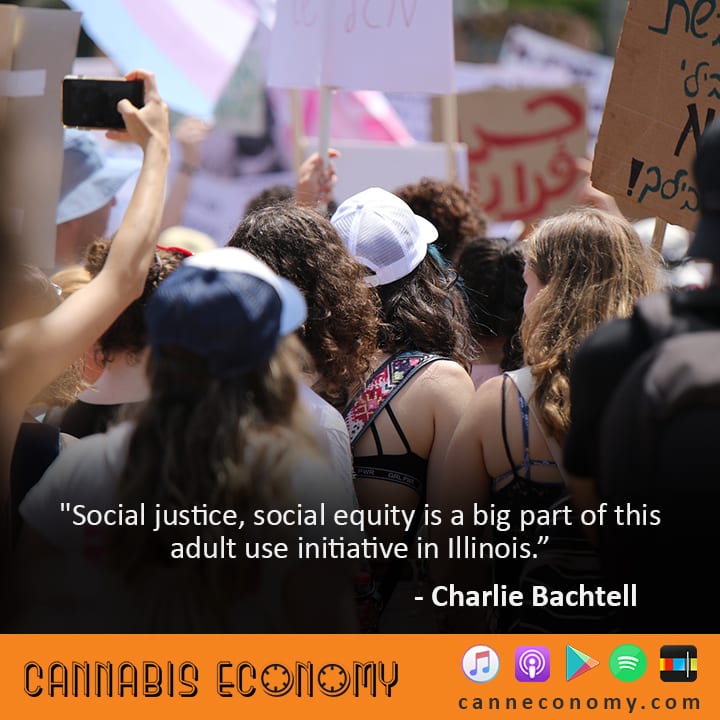 Charlie Bachtell joins us and shares how Cresco Labs and other medical cannabis providers have to adapt to pass regulation audits: “The objectives of the state are to make sure that you are tracking everything from seed to sale, that you are putting out as consistent and safe of a product as you, possibly, can, every time. While most things are black and white, there’s, also, some things that are gray. But, if you’re doing it for the right reason, for the right purpose, addressing the intent of that regulator, of that administration, chances are, they’re going to be okay or they’re going to work with you or they’re going to realize that, maybe, they didn’t have an answer for that question, yet, and you just gave them the answer that made the most sense.”

Seth: Charlie is, also, speaking on the digital workshop we've got coming up which features business, science and policy folks speaking about what is and what should be happening, now, in cannabis.

Seth: First a word from Wana Brands and, then, Charlie Bachtell.

Nancy: Yes. We've been in Oregon for about a year and a half. We're in a very large number of dispensaries, I think we're at about 70 or 80 percent.

Nancy: Oregon is very Colorado like, so it's very comfortable for us. Lots and lots of dispensaries. Pretty competitive state, but I'm pleased to say that Wana Brands has risen very quickly, in the media's data and we are making quite a name for ourselves, there.

Seth: Legally Speaking with Charlie Bachtell, thank you, so much, Charlie, for doing this.

Seth: Got the benefit of video this time and, so, I wanted to take the opportunity to talk about fingerprinting. We covered this before, but I really want to dive in on it, because, essentially, what was, not necessarily, the greatest idea, you know, in the long run or in the big picture was really, actually, a benefit. At least, for the two of us to know each other. Right?

Seth: Yeah. Give us your background on how you saw fingerprinting and your way in, to the industry, so to speak.

Charlie: Sure. You know, I think for the conversation, itself, it's important to note the period of time in which that situation was developed and Illinois passed its law which, you know, is our home state, here, Cresco's home state. Illinois got this law passed, the Compassionate Use of Cannabis Act, in August of '13. That's when it was signed into law and, presumably, it was passed in the session before it, but the governor signed it August of '13.

Charlie: That was after, like, five years. I think, it was about a five year process to get that legislation through Springfield and, at that date, in that day and age, so, you're talking about from 2008 to 2013, there weren't any examples, really, of highly regulated compliance focused cannabis programs out there. So, Illinois wanted to develop it. Of course, it all starts, of course, with the compassionate side of why any state would want to have a medical cannabis program, but Illinois... and it was very common, back then, to hear, "We don't want to do California. We don't want to create a California." 2011, '12, '13, '14, '15, we heard that a lot, from regulators and legislators.

Charlie: So, one of the ways... one of the things, that Illinois had to incorporate into their law was... there were a lot of highly... high regulation components, one of them was fingerprinting, not only of all the participants, so anybody with ownership, anybody with... that would have an operational registration card, so, like our employees, everybody that was going to be allowed into a facility, into a cultivation facility, had to be fingerprinted and background checked.

Charlie: They, also, though, extended that to the patients. So, my understanding, was that, as all legislation requires, there's give and takes, there's quote, unquote, horse trading, to make sure that you're addressing the needs of the different constituents to getting votes. To putting together a piece of legislation that could, actually, pass. In Illinois, at that time, the Illinois State Police, this is my understanding, that's how they got the Illinois State Police to be okay with the medical... the Compassionate Use Act, was to agree that patients would, also, be fingerprinted.

Charlie: So you wouldn't have this, you know, this idea of a bad element having access to cannabis. Back then, especially, everybody was very concerned with, wink, wink, nod, nod, you know, medical cannabis. Again, in Illinois' effort to make it very real and to make it a true medical program, they included a component like fingerprinting the patients.

Charlie: To your point, my background, being an attorney and being in the banking space and my partners too, coming fresh off of the regulatory overhaul of mortgage banking and, literally, to the point where the federal government creates a new regulatory body, the CFPB, the Consumer Financial Protection Bureau. Regulation was something that we were... we were just well steeped in. It was something that we, as professionals, had, had to acclimate to over... from 2008 to 2013, so for the five years before this law, the Compassionate Use Act, got passed in Illinois, me and my partners were, truly, developing and growing along with this highly regulated version of mortgage banking.