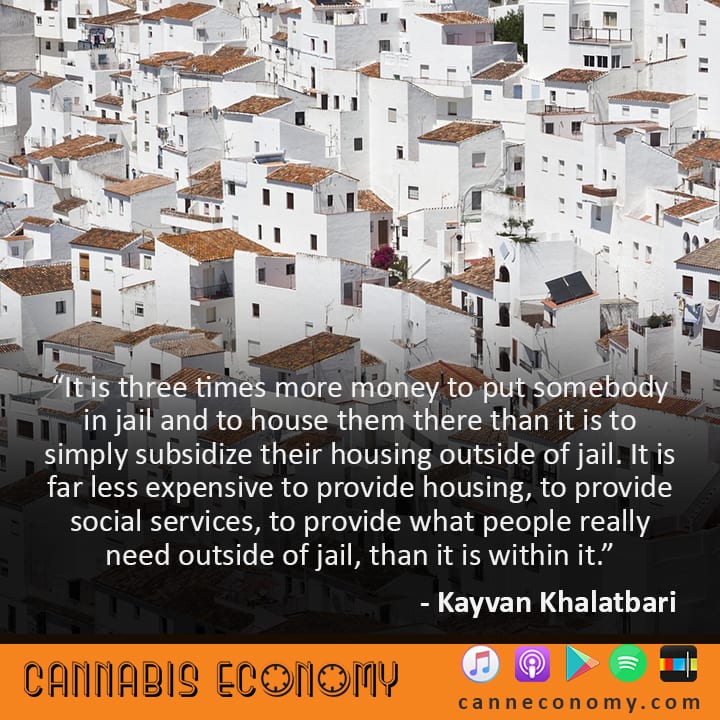 Kayvan Khalatbari joins us and shares how Denver progressed in leading cannabis legalization: “we knew that we had a lot of misconceptions and stigmas to overcome and it behooved us before the city and the state were regulating us very strictly, to self regulate, and to put on a good face for the industry. We knew that there were certainly a lot of folks that perpetuated those stigmas and stereotypes we had to overcome, but there also a lot of great operators that maybe weren’t willing to step out in front of camera, step out in front of communities and be a face for the industry.”

Seth Adler: Kayvan Khalatbari returns. Welcome to Cannabis Economy. I'm your host Seth Adler. Download episodes on canneconomy.com. That's two Ns and the word economy. We've got a ton of direct insight on canneconomy.com these days including from Kayvan. This is an audio version of the com he's doing. He'll also be joining us on the digital workshop that we're doing featuring business, science, and policy folks talking what is and what should be happening now in legal cannabis. First a word for Medmen, and then Kayvan Khalatbari.

Seth Adler: Medmen continues to expand its footprint on the cannabis landscape, opening new stores in Los Angeles, Las Vegas, and the iconic Fifth avenue in Manhattan. They've also opened a 45,000 foot high tech cannabis cultivation and manufacturing facility in Nevada. The company has reached a one billion dollar valuation making it the country's first cannabis unicorn, and it's just the beginning. Learn how Medmen is building the future of cannabis today at Medmen.com.

Seth Adler: So, it's community with Kayvan Khalatbari. Kayvan it is always good to see you.

Kayvan K.: Seth, it is always great to see you as well, and thank you for having me.

Seth Adler: So this whole thing is about community, and the various ways that can be improved. You've got a rich history in cannabis and just because this is the first one, let's just do the quickest biography for anybody that doesn't know your name.

Kayvan K.: Yeah my name's Kayvan Khalatbari. Co-founder of Denver Relief Consulting. I've been in cannabis policy reform since 2005 here in Denver: that's expanded into work at the state level, and then across the country both as and advocate and a business owner. Founder of companies across the country: Cresco Labs being one, which went public in Canada last Fall, and now we're working with a team out of Ohio.

Kayvan K.: But really now trying to set aside a lot of my business interests and focus on advocacy and what I want the cannabis industry to be, which is a better industry, not just another one. And really trying to focus on diversity inclusion, re-investing in communities that have been harmed by the war on drugs, environmental stewardship efforts, community impact and academic and research progress.

Seth Adler: Wonderful. That's a wonderful baseline. The first organization you mentioned Denver Relief Consulting, really began as Denver Relief, which was... What would you call it? A dispensary? A compassionate distribution center?

Kayvan K.: [crosstalk 00:02:27] vertically integrated cannabis business. One of the first in Colorado, which we sold in 2016 to Willie Nelson's group.

Seth Adler: You are well known, or that organization was well known because of the community involvement that you stewarded. Just take us through to that point before we get to our main subject today.

Kayvan K.: I think one of the things that we did, knowing that we were the first state, and Denver was really one of the first cities in the country to regulate medical cannabis back in the day, we knew that we had a lot misperceptions and stigmas to overcome and it behooved us before the city and the state were regulating us very strictly, to self regulate, and to put on a good face for the industry.

Kayvan K.: We knew that there were certainly a lot of folks that perpetuated those stigmas and stereotypes we had to overcome, but there also a lot of great operators that maybe weren't willing to step out in front of camera, step out in front of communities and be a face for the industry. We did that at Denver Relief, particularly through our Green Team, which was a volunteer service organization that we used to coalesce businesses, in and outside of the cannabis industry and folks, primary consumers in the industry, to engage in community initiatives: started as cleaning trash at 420 Festivals that ultimately led to college scholarships for underserved youth and feeding homeless and then working on the topic of homelessness and further drug policy reform as well.