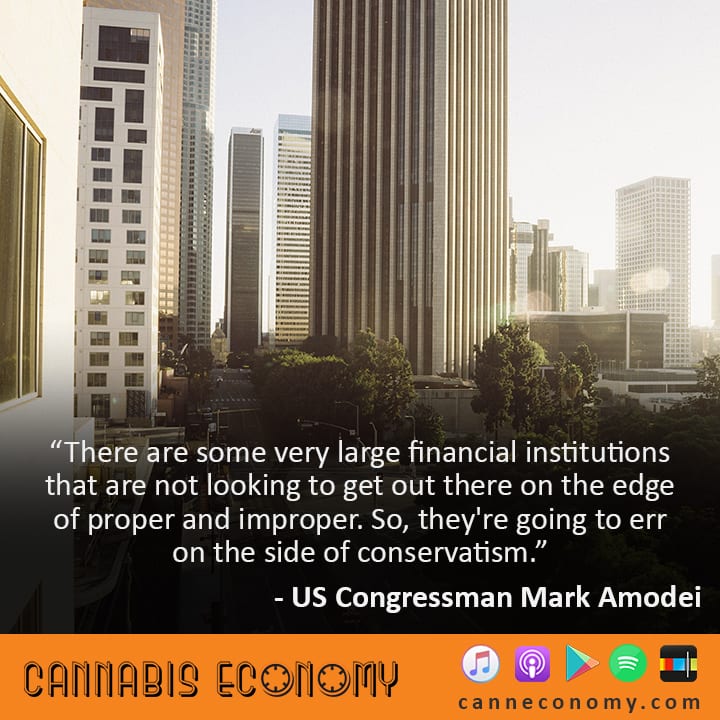 U.S. Congressman Mark Amodei joins us to discuss cannabis legislation and policy in Nevada, including banking. Amodei fervently believes that legal cannabis businesses should be able to deposit their earnings and use all of the financial tools that are available to other types of businesses – this is an issue of public safety as well as reducing the illicit market. The Safe Banking Act will most likely pass the House, according to Amodei, and, although the bill is not perfect, he thinks that it is worth fighting for. Amodei also supports the STATES Act, but is prioritizing banking for the time being.

Seth Adler: First word from MedMen, and then US Congressman Mark Amodei.

Speaker 2: The company has reached a $1 billion evaluation, making it the country's first cannabis unicorn. And it's just the beginning. Learn how MedMen is building the future of cannabis today at MedMen.com.

Seth Adler: That's good. Me, too. I want to start by thanking you for your service.

Mark Amodei: Oh, you're welcome. I'm glad that you're a forgiving guy, and that's good.

Seth Adler: Oh, I don't mean in Congress. I'm not thanking you for that.

Seth Adler: You were in the Army, sir.

Seth Adler: Whenever I come across a veteran, whether they are serving congressman, senator, whatever, thank you because you're helping out.

Mark Amodei: It was a neat thing. The thing I'm most proud of, though, was my oldest daughter spent four years on active duty in the Navy.

Mark Amodei: Obviously, as a parent, you're like, "Yay."

Seth Adler: There you go. Yeah. And thanks to her. Now, is there any reason... Should we be looking into why she chose the Navy as opposed to the Army if you were in the Army?

Mark Amodei: Probably, you know the answer just by asking that question. But, "Can't do what he did. We'll go another direction."

Seth Adler: "We'll do our own thing."

Seth Adler: You yourself seem to be someone that is somewhat of a free thinker. You seem to do your own thing. When reading your bio, it doesn't read straight, if that makes sense.

Mark Amodei: We try to focus on the issues. The issues are what they are. They don't lend themselves to a particular agenda or a philosophy. It's like, hey, you come to work and you try to solve the problems that are at hand. I don't know whether you can categorize that or not, but you can sure as heck say that when all else fails, try focusing on the issue.

Seth Adler: There we go. How about even before all else fails, right?

Seth Adler: So let's dive in this treasury hearing where you spoke up and said... I think it was in March, even though podcast land knows no time. And you said, "Wait a second. How does this make sense for businesses when it doesn't make sense for the actual state?" And if you could unpack it from your opinion. I don't want to give my opinion on it.

Mark Amodei: Well, I mean, everybody has their opinion on whether or not it should be legal or not.

Seth Adler: This is cannabis.

Mark Amodei: But in many instances, it's like, listen. The people in the state voted, and so you can't... especially somebody like me. It's like, "Well, thanks for voting for me, but I think you were wrong in voting for something else." It's like don't go there. You can't make that match.

Mark Amodei: So I tell people [inaudible 00:02:59] my cup of tea, but in my state, the people in Nevada voted to make it legal. Okay. So now, when you say, "Well, there's federal implications," it's like, okay. There's federal implications. But when you dig a little deeper and say, "Well, there's no federal implications for cities, counties, and states to bank. They can show up with all the cash they want for their tax payments, right up to the federal government, and nobody says two things about that. Treasury isn't going to crack down on anybody for paying their income taxes in cash from cannabis sales."