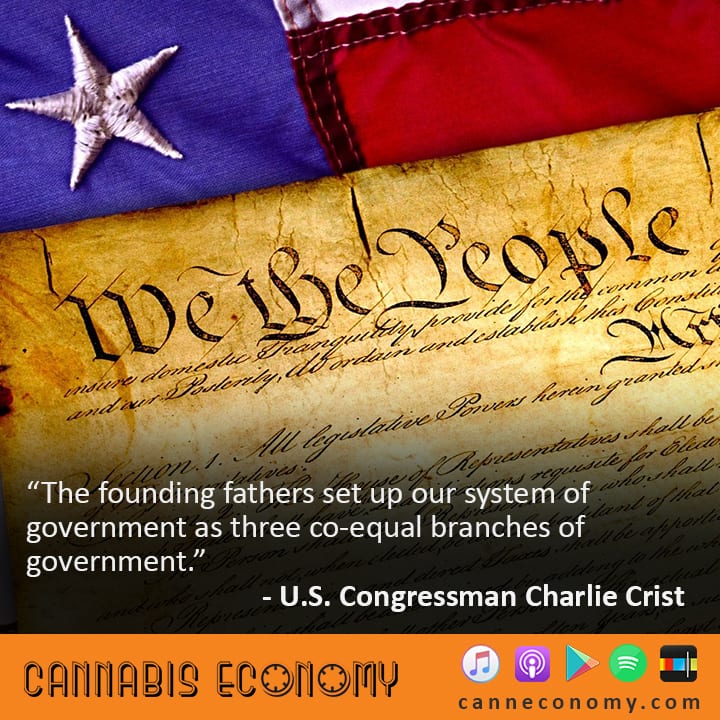 For U.S. Congressman Charlie Crist, medical cannabis is personal: years ago, his older sister died of brain cancer, and unfortunately, medical cannabis was not available in Florida that time. That experience has informed Crist’s belief that everyone should have the right to use cannabis as a healer. Crist also notes that people throughout the U.S. are already on board regarding cannabis, and that his biggest priority is getting federal legislation up to speed with that same accepting attitude. Luckily, Crist is optimistic, as he has found cannabis reform to be a very bipartisan issue in Congress.

Nancy: Yes, this is our latest partnership.

Nancy: Extremely different. As you know, there's very limited licenses available in Florida, and it's completely vertically integrated with no wholesaling. The good news, however, is that each license holder has the opportunity to open 25 dispensaries, and so we'll at least have a strong presence in 25 very strong retail locations.

Seth Adler: This is when I learn who has a better voice than me. Congressman Crist, you certainly do.

Charlie Crist: No, I don't. No, I don't. You're too kind and too gracious, but it's great to be with you, Seth. Thank you.

Charlie Crist: Indeed. Well, I think the whole country has evolved. We've seen it state by state, by state. I think the number is up to about 33 states that either have medicinal marijuana and/or recreational. I think that trend is only going to continue. The thing I'm interested in, very much so, is getting the federal government caught up to speed with where the people throughout our country already are. It really is kind of personal, the evolution, if you will.

Charlie Crist: I grew up with three sisters. My older sister Margaret unfortunately got brain cancer a number of years ago. Toward the end, the discomfort and the pain and all of those other things that are attendant to that ... It was the same kind of cancer John McCain had.

Charlie Crist: The fact that it wasn't medicinal marijuana available in Florida at the time, my home state and hers, was difficult to witness. The problem is, not just for people like my sister, but so many Americans, so many people around the world, many of them veterans, as a matter of fact, that suffer and have pain or different maladies that affect them where it has now been shown that cannabis can be a very appropriate type of healer. I think we need to wake up and get with the program.

Seth Adler: Yeah, My mother passed away now 14 years ago.

Seth Adler: She had something called amyloidosis. Because we're in the northeast, you're in the southeast.

Seth Adler: We didn't even think about cannabis as a solution at that time. And to think for both of these people that at least easing the pain, it could have been there.

Charlie Crist: Indeed, no question about it. You think about another problem we have in our country, the horrible opioid epidemic that we're suffering from. Again, that's where cannabis could be a much more positive way to handle pain and that kind of challenge.

Seth Adler: There is a litany of legislation that could be voted on. Whether it will be voted on is a different question. But where do you find yourself in deciding what you will do on the legislation that's at least in front of you?

Charlie Crist: Well, just kind of reflect upon what we just chatted about. Whether it was your mom or my sister or other friends that I know in my district in St Petersburg, Florida, that talk to me about it would be so nice to be able to utilize marijuana as an alternative to some of these pain pills and things that are so harmful. So I'm pretty optimistic to be, to be honest with you, because when I go to different committees up here in Washington and the issue comes up, it's bipartisan.

Seth Adler: Now it is. Yeah, sure.

Charlie Crist: Very much so. In fact, we're sponsoring a piece of legislation with Don Young from Alaska that would help veterans as it relates to the use of marijuana, cannabis. Because the federal law will not permit federal employees to be able to use even medicinal marijuana and be hired by the federal government, even if a state has it legal. That's what we're trying to clear up. So that's number one on my list right now.