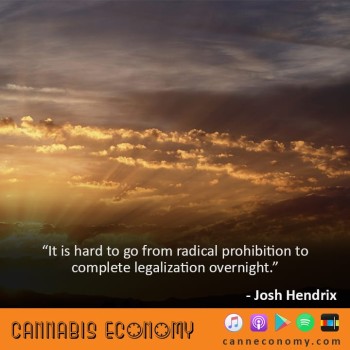 Josh Hendrix, President of U.S. Hemp Roundtable, predicts that, in the next two to three years, hemp will finally begin to infiltrate the market. When that happens, there will be a race to efficiency on the agricultural side, which should lead to both consistent types of hemp as well as varieties of hemp – ultimately, this will create a commodity market. Because the rules of the 2018 Farm Bill have been unclear for farmers and manufacturers, Hendrix carefully explains the process: “You can’t just go out and plant hemp. You can’t find some seed in your barn that somebody left years ago and go out and plant it. Can’t grow it in your backyard. If your state is participating in the Hemp Program, the USDA Hemp Program, they have to go get approved. Once they’re approved, you will have to fill out a form, go through their licensing process, make sure that you actually have a farm – that you have a plan.”

Seth Adler: Josh Hendrix from the U.S. Hemp Roundtable joins us. Welcome to Cannabis Economy. I'm your host Seth Adler. Download episodes on CannEconomy.com, that's two N's and the world economy. This is another one of those sessions from the digital workshop. So you can hear it here, you can see it there on CannEconomy.com along with all the other sessions.

Seth Adler: First a word from MedMen, and then Josh Hendrix.

Seth Adler: MedMen is the most recognizable cannabis retailer in the U.S. with operations across the country in flagships stores in Los Angeles, Las Vegas, and New York. Recently, MedMen entered Florida for the first time, the third largest medical cannabis market where the company is licensed for 35 total stores. It's all part of MedMen's impressive footprint, which currently spans 86 licenses, including pending acquisitions. Learn more about how MedMen is creating a safer, happier, and healthier world at MedMen.com.

Seth Adler: Okay. So we've got Josh Hendrix from the U.S. Hemp Roundtable. Josh, thanks for doing this.

Josh Hendrix: Happy to do it. Happy we're finally able to connect.

Josh Hendrix: You would think. As someone who quit their job the day after the 2014 Farm Bill passed or 2013 Farm Bill passed in February of 2014, I thought we were done too. But, boy, was I wrong because I stood about five years now lobbying with different folks on the Hill and trying to figure this thing out.

Seth Adler: Give us the highlights if you would over that five year period. Well, really four year period until this current Farm Bill passed. What needed to be done? Give me the behind the scenes.

Josh Hendrix: So the '13 Farm Bill that passed in February of 2014 legalized pilot programs. So in states like Kentucky and Colorado where we were starting to see state legislation change, those states if their Department of Ag was willing to administer a program, which takes a lot of work, a lot of administration work and testing and sampling and GPS coordinating and things like that with the state police, all of that good stuff that goes with it, those states were then allowed to grow pilot projects. So there was even a big debate in 2014, well you can't do anything with the material after it's over. We had to argue that, "No, in the Farm Bill is says to study the marketing of this product too. So we have to see if there's a market, and that means not only the raw materials but the products that have been made from them, et cetera." And we were talking earlier before we started about the gray areas, and we'll get into that a lot. This was one of the envelopes that we started to push with the domestically grown hemp, right?

Josh Hendrix: I work for a company that's been getting hemp from Europe for I guess three years longer than we've been even growing it in the states. So we were the one that provided a lot of that seed that was grown in Kentucky that first year in 2014. But it really opened the door so we could do it. I was in Congressman Massie's office a couple years ago when we were trying to get this new Farm Bill done, and he said, "Well, the first Farm Bill served its purpose." I said, "What do you mean?" He said, "Well, it was just kind of a psychological experiment to show people that the general public wouldn't freak out that we were growing hemp and that they drove down the road and they saw it, they wouldn't freak out." The guy that was with me that worked for another company looked at me and goes, "That was an extension psychological experiment."

Josh Hendrix: Because a lot of us jumped in feet first. We created businesses that took tons and tons of money and energy and time to do. And so it really got the ball rolling, and we saw more states fall like dominoes to try to get in because they felt like states like Kentucky would leave them behind or Oregon, New York, Washington State, New Jersey, Pennsylvania. The dominoes started to fall, and you started to see all these states support it. So then for the next couple years, we essentially tried to get a standalone Hemp Farming Act passed saying, "Look, hemp is not a controlled substance. There's no reason to treat it as such. Every other industrialized nation in the world treats hemp like a commodity, we want to do the same. Let's get this ball rolling and do that."