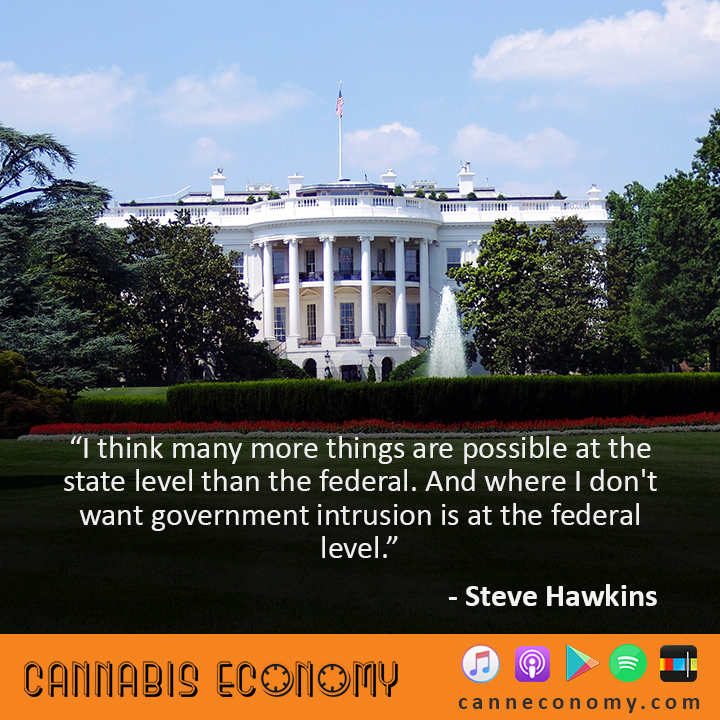 Steve Hawkins, Executive Director of the Marijuana Policy Project (MPP), discusses his hopes and predictions for upcoming cannabis policy in the United States. In particular, Hawkins believes that states should have the right to legalize cannabis in their own way without federal intrusion, as much more is possible at the state level. As well, Hawkins sees the legal cannabis industry as a fantastic way to create a large number of middle-class jobs – it’s already on its way toward generating a million jobs for the economy. Because the war on drugs resulted in millions of cannabis convictions, expungements need to occur in similarly large numbers: “You don’t make a dent with 25 thousand expungements. You make a dent with 750 thousand expungements.”

Seth Adler: Steve Hawkins returns. Welcome to Cannabis Economy. I'm your host Seth Adler. Download episodes on Canneconomy.com, that's two N's and the word economy. This is another one of those digital workshop sessions. So you can hear it here or you can see it there on Canneconomy.com along with all the other sessions. First, a word from Bedrocan, and then Steve Hawkins.

Seth Adler: Bedrocan is a patient-driven global pharmaceutical minded cannabis company. Their entire end to end process is GMP certified through Dutch and ultimately European authorities. Bedrocan is the market leader in Europe for medical cannabis and has been the sole supplier to the Dutch government for 16 years. Through the Dutch government, Bedrocan provides product to 15 countries currently. As a science-based company, Bedrocan invested in clinical research. The Laden University conducted a double blind placebo controlled clinical trial on fibromyalgia with Bedrocan products, which yielded promising results. They're now working on a followup to that study. Bedrocan is also working on the extent to which cannabis can reduce our reliability on opioids. Bedrocan believes that clinical research is key for the future of the company standardized product, the industry, and the patient. Visit Bedrocan.Com for more information.

Seth Adler: Okay. We've got Steve Hawkins, currently the Executive Director of a MPP. Steve, thanks so much for doing this.

Seth Adler: The reason I say currently is because you've got a fair amount of work behind you, and so we're lucky to have you here in cannabis. And so wanted to start out by letting folks know if they don't know, which they probably should by now, but a little bit more about your background.

Steve Hawkins: Well thanks, Seth, and always a pleasure beyond.

Steve Hawkins: So I come to cannabis having spent about three decades working on civil and human rights issues and criminal justice reform at both the state and federal level and so for me, I saw this work as like the intersection of all of that from a civil rights perspective of the racial disparities in policing and prosecution, from the standpoint of human rights, issues around really personal freedom and liberty. And also how the U.S. war on drugs has been waged globally with tremendous human rights violations behind it. And then finally, this is an opportunity for people to make a living, good middle class jobs. The government needs to get out of the way and let the states do their thing.

Seth Adler: It's an interesting concept that government getting out of the way based on the conversation that we're about to have because legislatively legal. A policy perspective. So you're the policy guy for the first time here, we've done this through the government. It's been the voters who have kind of demanded legal cannabis, whether it be medical or adult use. So you know, diving in on Illinois, and congratulations again to you, to us, to patients, and business owners. What were the indicators maybe when you came into the picture of the possibility of legislative success?

Steve Hawkins: Sure. So key indicators I think were the fact that first and foremost, MPP has been on the ground for six years in Illinois. We had ushered in working with some key legislative leaders in the state, Senator Steans and Kelly Cassidy in the House. They were terrific in terms of being the champions for medical cannabis six years ago. And then, Seth, we just kept building from there. So having key legislative leaders and then the indicators just that this could be the successful year was with Governor Pritzker coming in and making this a priority for his administration.

Seth Adler: Yeah, the groundwork was certainly set and I've spoken with Kelly Cassidy for years about this. We did have also a fair amount of success with the medical program.

Seth Adler: Initially it was derided by a industry folks. What are you doing fingerprinting grandma? But in taking a few steps back, even though there were patient count issues to begin with, it's a successful program and that had to play into it, I would imagine.

Steve Hawkins: Yes. I think, look, even seeing how Governor Rauner before Pritzker. Rauner opening up for medical, all the patients who were getting addicted to opioids, right. And waving those fingerprint requirements and saying, "Look, our medical cannabis program is up and running. You all can get to that. I can go to the front of the line." So even Illinois realizing the connection to be made between ensuring that patients and pain and other chronic needs, not relying on opioids, and having as an alternative cannabis was a good indicator that the legislative body had really started to shift in its thinking.

Steve Hawkins: Okay. There certainly were great coalition of groups on the ground with various levels of support, such as, for example, the ACLU and even some of the labor unions were very supportive. But also, Seth, the business community in Illinois and particularly Charlie Bachtell over at Cresco Labs and John Sullivan. Just terrific supporters. Understanding the bigger picture and not being just solely wedded to their particular corporate interest was was helpful. They really help to pull it all together. And my hat's off to them. And we can get into other players but when I think about key people, it's good business leaders and with people like Charlie, a strong coalition on the ground. Also, I think the lobbyists that work with us over years, like Peter Baroni, well-respected, helped ultimately pull all of this together.