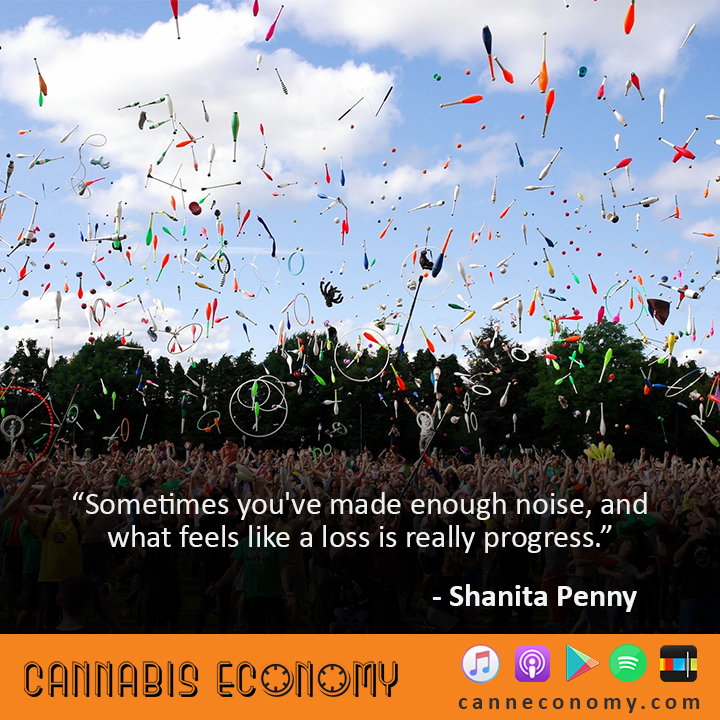 Shanita Penny, of the Minority Cannabis Business Association, shares with us that the MCBA is currently pushing for as much equitable cannabis legislation as possible. For Penny, equity means “ensuring that we address the social justice and criminal justice reform aspects, that we make sure small businesses and minority-owned businesses have a place in this industry, and that we also create patient access that is real and true.” Penny notes that by removing certain barriers to entry, we are then improving communities that have been most affected by the war on drugs. She reminds us that, as long as we’re making enough noise, a legislative loss may actually be progress in disguise.

Seth Adler: Shanita Penny joins us. Welcome to Cannabis Economy. I'm your host, Seth Adler. Download episodes on canneconomy.com. That's two Ns and the word economy. Or, wherever you currently get your podcasts. So over at canneconomy.com, in addition to the direct insight from science, business, and policy luminaries that we get in either video or written word form, we've now added reports, if you will, on qualifying conditions and cannabis. So these are updates to the 2017 National Academies Of Science, Humanities and Medicine report from 2017, but we've gone ahead and said, "If you're chronic pain, if you're cancer, if you're weight control, here's the research that's been done in 2018." So check out canneconomy.com for that. First word from Wana Brands and then Shanita Penny.

Seth Adler: Wanna know with Wana Brands. As far as the cannabis economy global landscape, it really is starting to feel like Colorado in 2009.

Speaker 2: Almost every single day you read an article about a new country that is legalizing or thinking about legalizing. And so we're starting to see some widespread action in Europe, South America, just all over the globe. We're really starting to see everybody open themselves up to the positive possibilities with cannabis.

Seth Adler: It's Shanita Penny. Minority Cannabis Business Association, my old colleague. And we're here! We're like, what, eight blocks away from my old stomping grounds?

Seth Adler: The Apollo Theater. Well, first off ... We'll get into that in a second. Let's set the table here for what's going on with the Minority Cannabis Business Association, easy for me to say. Here we are. It happens to be ... Podcast land knows no time, but it happens to be the middle of 2019. What is the current landscape as far as MCBA is concerned?

Shanita Penny: We are focused on policy. There is so much happening on the Hill right now that we are tuned in and working collaboratively with the other industry associations, advocacy organizations, and really pushing for equitable cannabis legislation in whatever ways we can get it.

Seth Adler: All right. Let's now unpack this, just in case folks don't ... Because I go ahead and I say we've got to make sure that we pay attention to communities that have been disproportionately affected by the war on drugs through equitable measures. And so when I say that, I just assume that everybody knows what I'm talking about. So what am I talking about, or what are you talking about when we say such things?

Shanita Penny: Yeah. When we talk about equity, we want to be clear that we are really leveling the playing field, that we are addressing the harms of communities and individuals that were impacted by the war on drugs. And so it's not just an industry thing, and oh, when there's a business coming to town that we're going to address some of these issues. It's about ensuring that we address the social justice and criminal justice reform aspects, that we make sure small businesses and minority-owned businesses have a place in this industry, and that we also create patient access that is real and true and that will not impact you as it relates to veterans benefits or housing or anything. You know, just impacting your life.

Seth Adler: And so when we say communities disproportionately affected by the war on drugs, there are statistics that showcase how much more likely somebody that has skin color that is not white is to be arrested versus someone that is white. I had no problems. I was able to have my cannabis and it was, "Oh, fun. And wink, wink, nudge, nudge. Please don't do that, at least where we can see it.".

Shanita Penny: Oh no, you're on track. And that's why it's so important for us to have the conversation in conjunction with every other aspect of legalization, because it doesn't just impact someone who wants to be a part of the industry. It is impacting and has impacted for a long time, people that just want to get a job but have to check the box; people that want to access federal financial aid. And so when you start to remove these barriers that have impacted people for decades, now you can start to improve those communities. Now you truly empower those communities and they become a benefit to the overall economy. And they're not the drag on a city or a state's budget, like they tend to be seen. And the reality is, is that they're not spending the resources that people associate with this drag on budgets.