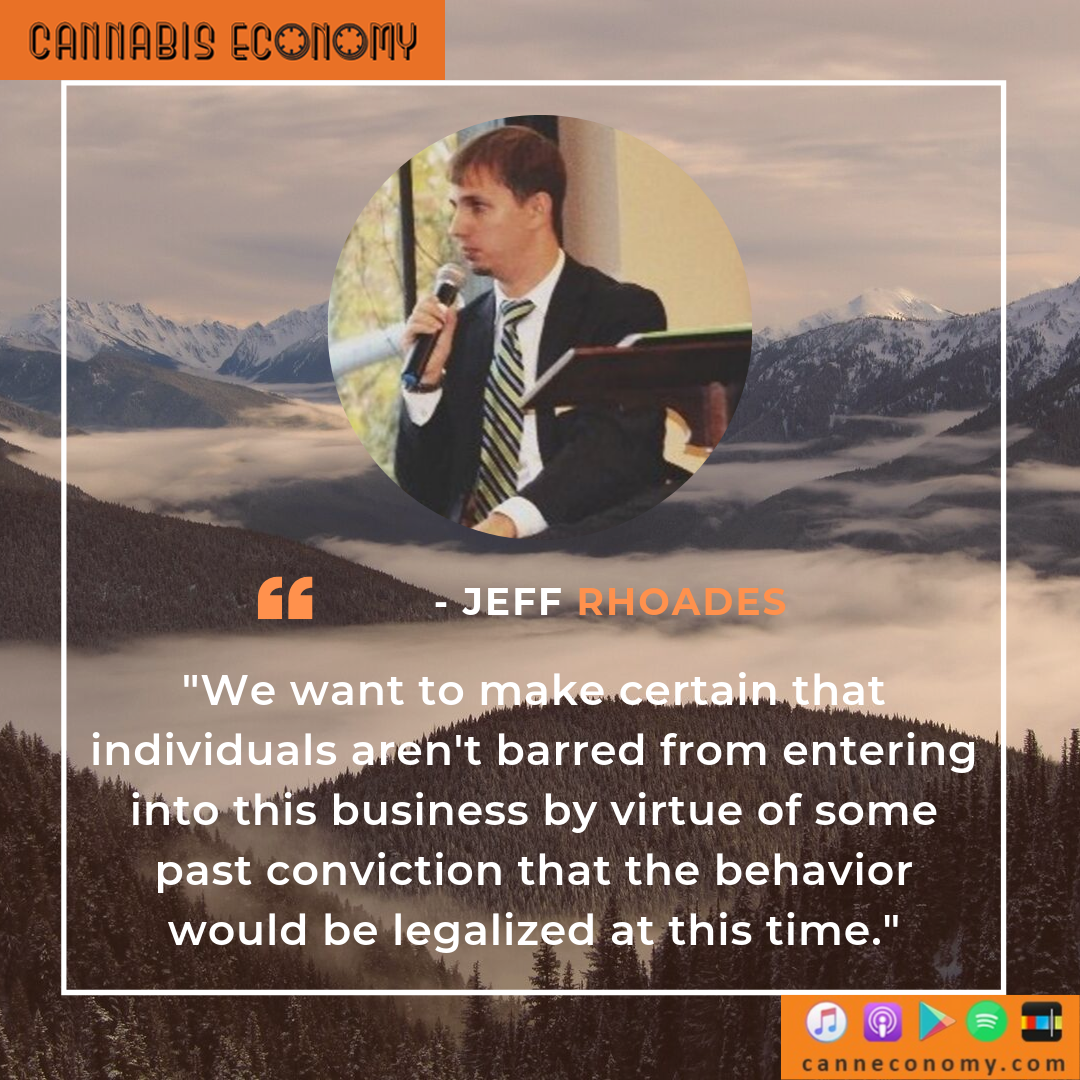 Jeff Rhoades, Senior Policy Advisor of the Oregon Governor’s Office, joins us to discuss the future of regulations in Oregon. Rhoades hopes that the cannabis industry will eventually be set up like the wine industry, and also anticipates that we will see a relaxing of federal regulations in the near future. Rhoades also touches upon equity in the cannabis industry: “We have populations here in Oregon, like other states, that have been disproportionately affected by the drug war and so, we want to make certain that those individuals aren’t barred from entering into this business by virtue of some past conviction that the behavior would be legalized at this time.”

Seth Adler: Jeff Rhoades joins us from the Oregon Governor's Office. Welcome to Cannabis Economy. I'm your host Seth Adler. Download episodes on canneconomy.com, that's two N's in the word economy, or wherever you currently get your podcasts. Ton of direct insight over at canneconomy.com from policy, science, and business leaders, one-on-ones on cannabinoids, and 2018 research supplements to the National Academies of Sciences, Engineering, and Medicine research from 2017.

Seth Adler: This session with Jeff was another one of those digital workshop sessions, so you can see it as video up on canneconomy.com, that's two N's in the word economy. First a word from Bedrocan and then Jeff Rhoades.

Seth Adler: Bedrocan is a patient driven, global pharmaceutical minded cannabis company. Their entire end to end process is GMP certified through Dutch and ultimately European authorities. Bedrocan is the market leader in Europe for medical cannabis and has been the sole supplier to the Dutch government for 16 years. Through the Dutch government, Bedrocan provides product to 15 countries currently. As a science based company, Bedrocan invests in clinical research. The Leiden University conducted a double blind placebo controlled clinical trial on fibromyalgia with Bedrocan products, which yielded promising results. They're now working on a followup to that study. Bedrocan is also working on the extent to which cannabis can reduce a reliability on opioids. Bedrocan believes that clinical research is key for the future of the company, standardized product, the industry, and the patient. Visit bedrocan.com for more information.

Seth Adler: Okay. We've got Jeff Rhoades from the Office of the Governor right there in Oregon. Jeff, thanks so much for your time.

Jeff Rhoades: My pleasure. Happy to be here.

Seth Adler: So let's talk about Oregon. You guys have your own thing going on, don't you?

Jeff Rhoades: We always do. Yeah, the Oregon way.

Seth Adler: The Oregon way. Give us an overview of that. Step into the Wayback Machine and just tell us about legal cannabis in all of its different varieties from then up until now.

Jeff Rhoades: Yeah, that's a great question. You know, Oregon has sort of been a forerunner in legalized cannabis for a long time now, starting with decriminalization of cannabis crimes back in the 70s, so we were among the first states to take advantage of moving in that direction. And then also one of the first states to set up a medical marijuana program, here in Oregon we call that a OMMP, the Oregon Medical Marijuana Program, which as we get into our discussion here, you'll see is separate and distinct from our adult-use cannabis market.

Jeff Rhoades: It was in the late 90s that we put together the Oregon Medical Marijuana Program and it's sort of a unique program. It doesn't operate like other programs around the nation. What it does is it makes certain to have a grower and patient relationship, which I think is quite different. You have that direct linkage between the grower and the patient, which is something that we don't have in other states for their medical marijuana programs. And what this has allowed is patients to really select which strains work best for them and to work directly with a grower. It makes certain that they have access to the medicine that works best for whatever condition they're trying to treat.

Jeff Rhoades: And this has been something that our medical patients here in Oregon have really taken advantage of and really love. So we've got that in place since the late 90s and really that program was also meant to be a little bit opaque. It was purposefully opaque because the idea at the time was that we didn't want to allow the federal government to have too much access of what we're doing. This was still very new. Of course, we have a Schedule 1 controlled substance, it's still a Schedule 1 controlled substance, and so that program wasn't as robust in what you'll see with the tracking and everything else that we have with our current adult-use market that was set up after the Cole Memorandum.