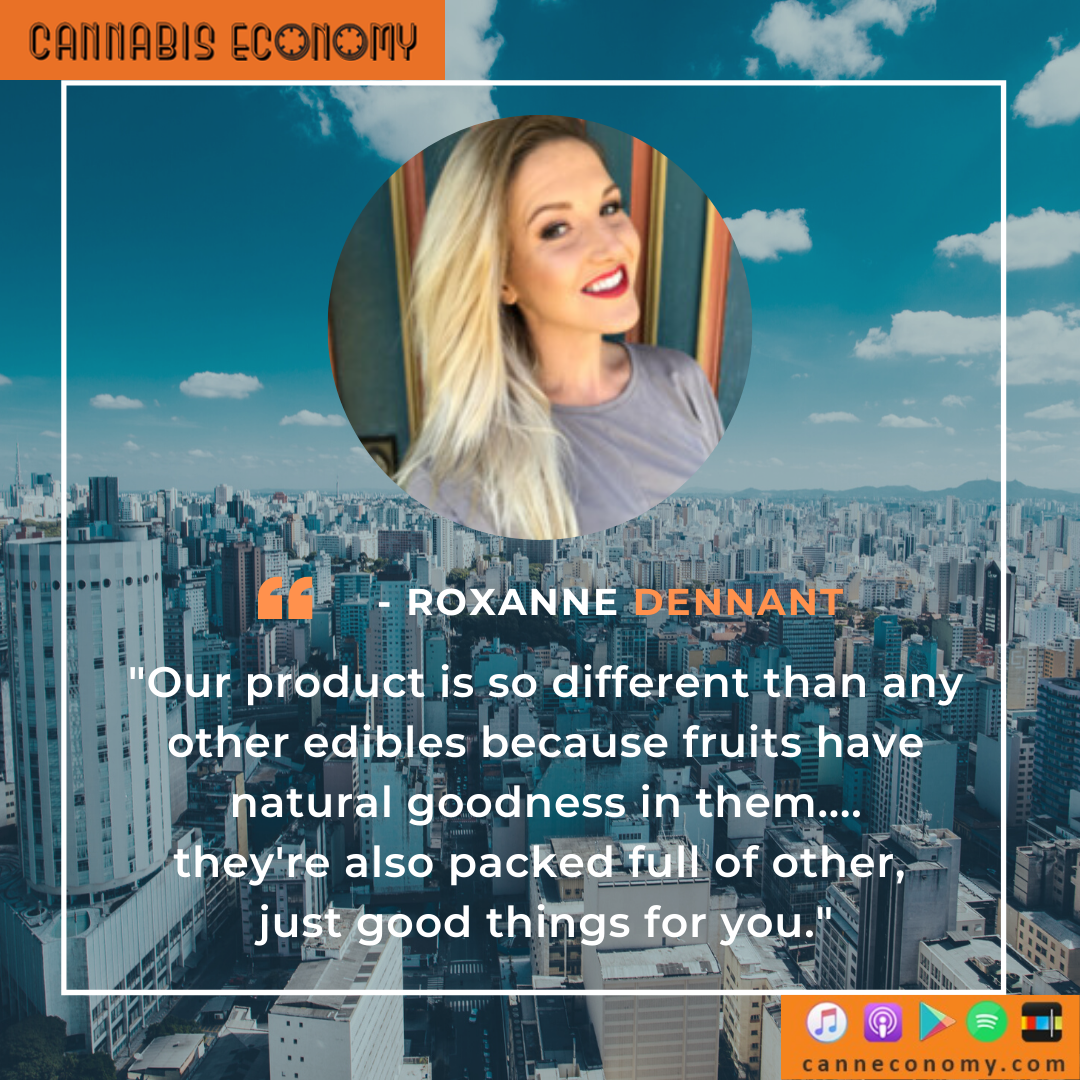 A dietary revolution is happening all over the world, Roxanne Dennant, CEO of Fruit Slabs, points out. From veganism to gluten-free diets, a higher consciousness about quality choices regarding food is certainly taking hold. Despite how widespread this consciousness seems to be, Dennant noticed a lack of health and wellness options being offered in the edible market, which is how Fruit Slabs was born. Dennant notes what makes Fruit Slabs products so special: “Our product is so different than any other edibles because fruits have natural goodness in them. They’re locked full of natural terpenes, they’re also packed full of other, just good things for you, potassium, melatonin, altriptofan.” Dennant also discusses the tricky licensing process back in 2016-2017, the environmental impact of agricultural farming, and what Fruit Slabs has been doing to support veterans and the LGBTQ+ community.

Seth Adler: Roxanne Dennant joins us. Welcome to Cannabis Economy. I'm your host, Seth Adler. Download episodes on canneconomy.com, that's two Ns and the word economy or wherever you currently get your podcasts. We've got a ton of direct insight at canneconomy.com, from business players like Roxanne, policy and scientists as well. First a word from our partner CannaTech and then Roxanne Dennant. CannaTech is the world's leading cannabis tech event that attracts the entrepreneurs and researchers driving the medical cannabis industry. CannaTech is an event where deal makers, scientists, and entrepreneurs meet in beautiful, exotic locations in order to accelerate global cannabis innovation.
Seth Adler: This November, CannaTech will be in Cape town, South Africa for two days of sun soaked deal making, networking and learning. South Africa boasts the most sophisticated and secure economy on the continent and is attracting quality cannabis industry investors. Cape town is the economic hub of South Africa and the perfect place for CannaTech. This is a once in a lifetime chance to take part in the global cannabis conversation. For more information and to reserve your tickets, visit www.canna-tech.co/deal making.
Seth Adler: And so that's, yeah, why we put the microphones with the headset thing. So you got the earphones there, so that the headphones I guess is really what they're officially called. But they should be called to ear phones.
Roxanne Dennant: They should be called earphones, although they do rest on your head so, and your ears are attached to your head. So I guess that works.
Seth Adler: But what's the most important part?
Roxanne Dennant: Is your ear.
Seth Adler: Ears, yeah.
Roxanne Dennant: Yeah, totally.
Seth Adler: So earphones.
Roxanne Dennant: Earphones, I'll take it.
Seth Adler: Let's start this movement, I feel like, because the legal cannabis movement has begun.
Roxanne Dennant: It has begun.
Seth Adler: You are a part of it.
Roxanne Dennant: I am very much a part of it.
Seth Adler: All right, let's talk about that.
Roxanne Dennant: Yeah, I am living and breathing it. I started my company four years ago, when it was just medical. So it was 2015, I saw a shift coming.
Seth Adler: This is in the state of California?
Roxanne Dennant: The state of California, I started it, yes. And my company is called Fruit Slabs. We make an all vegan, organic ingredient, edible product, and we've had to shift and move with the legal regulations coming in. But it's done a lot better for us now with legalities coming in because it allows a new consumer to come in. When we first started, people were like, "Why do I want a vegan edible? Why do I want organic products? I don't need that. I can buy this rice crispy for this amount of money and I don't want your fully branded product."
Seth Adler: Right, it's so much cheaper than...
Roxanne Dennant: Exactly and I told them, I said, just wait, in two, three years you're going to want because there's-