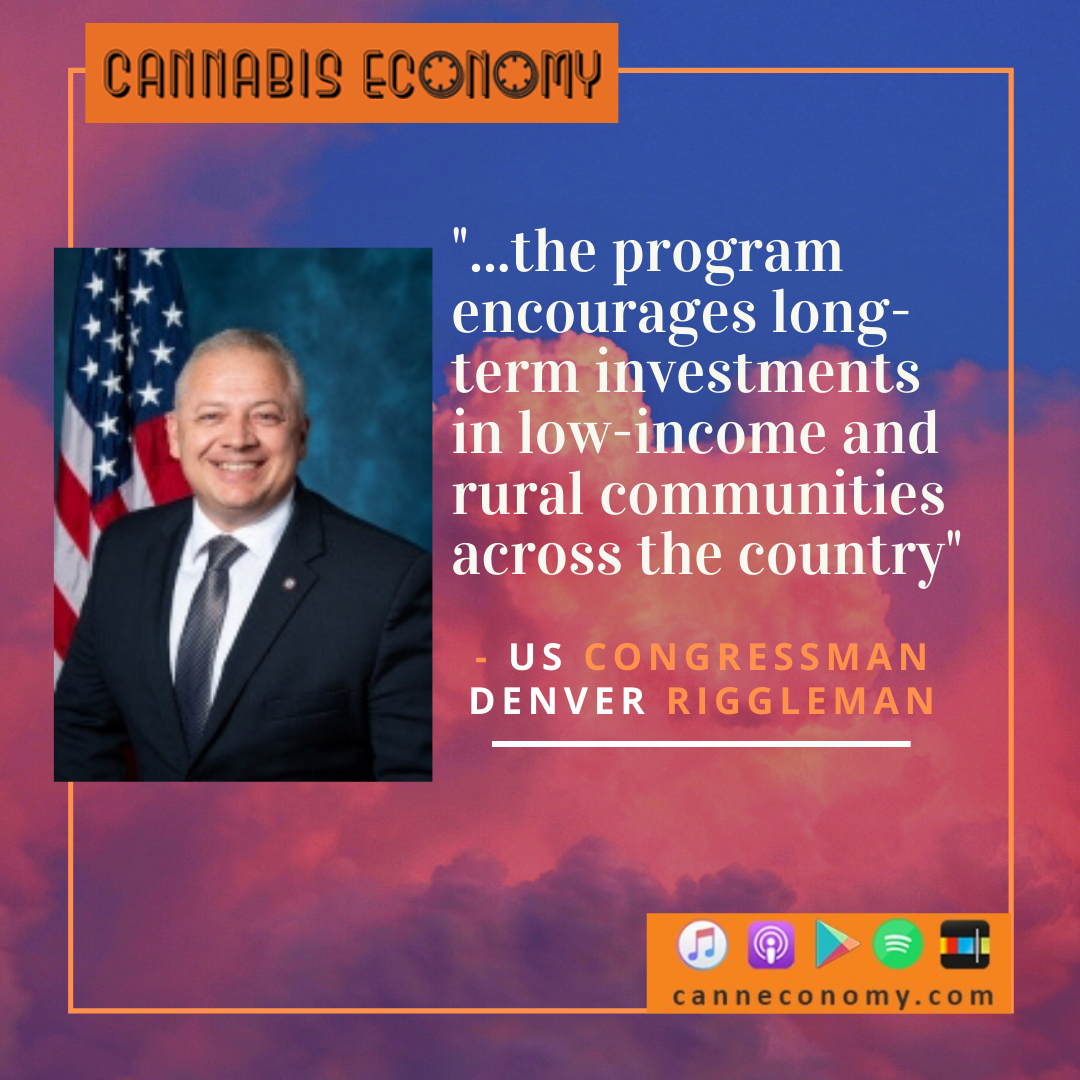 For U.S. Congressman Denver Riggleman, the SAFE Banking Act is about both freedom and controlling criminal activity; passing the bill was simply a matter of common sense. Although the bill isn’t perfect, we should be welcoming of iterative change. When discussing the social justice element of cannabis reform, Riggleman brings attention to the Opportunity Zones Program from the Tax Cuts and Jobs Act of 2017 — the program encourages long-term investments in low-income and rural communities across the country, and would be an effective means of catalyzing business. Riggleman suggests that this may be a better way to foster equality than the terms outlined in the MORE Act. Riggleman also discusses tax cuts vs. spending, NATO, jobs, and more.

Seth Adler: U.S. Congressman Denver Riggleman joins us. Welcome to Cannabis Economy. I'm your host, Seth Adler. Download episodes on canneconomy.com, that's two Ns and the word economy, or wherever you currently get your podcasts. We've got a ton of direct insight over at canneconomy.com from business, science and policy leaders. Go there for that and listen to this from CannaTech and then U.S. Congressman Denver Riggleman.
Seth Adler: CannaTech is the world's leading cannabis tech event that attracts the entrepreneurs and researchers driving the medical cannabis industry. CannaTech is an event where deal makers, scientists and entrepreneurs meet in beautiful exotic locations in order to accelerate global cannabis innovation. This November, CannaTech will be in Cape Town, South Africa for two days of sun-soaked deal making, networking and learning. South Africa boasts the most sophisticated and secure economy on the continent and is attracting quality cannabis industry investors. Cape Town is the economic hub of South Africa and the perfect place for CannaTech. This is a once in a lifetime chance to take part in the global cannabis conversation. For more information and to reserve your tickets, visit www.canna-tech.co/capetown.
Seth Adler: Congressman Denver Riggleman, I'm back. Thank you for having me.
Denver R.: Of course.
Seth Adler: Did I ask you last time if anybody called you Trey growing up?
Denver R.: No, because I'm Denver Lee Riggleman III. Yeah, they called me the turd. That's what my grandmother and my grandfather, my dad [inaudible 00:01:44].
Seth Adler: This is a term of affection.
Denver R.: It was a term of infection, which-
Seth Adler: Infection, not affection.
Denver R.: Yeah, yeah, to destroy my self esteem. They wanted me to be a better person.
Seth Adler: Hence the success in business, and then now we got elected and the whole bit.
Denver R.: It's sort of crazy. It's crazy. That's right.
Seth Adler: It's late in the day here, so I got notes for this one if you don't mind.
Denver R.: No, no problem. Don't mind at all.
Seth Adler: You guys passed the SAFE Banking Act.
Denver R.: We did.
Seth Adler: Come on.
Denver R.: It was odd. I came off the Capitol stairs and people were cheering that the Act was passed. I think my background's a little different. I just want to let people know and it's odd, it's not that somehow ... I've never actually had a drug in my life. But the issue is, it's about freedom, but it's also about criminal activity. I think it's a bit ridiculous that we have states that have legalized marijuana or cannabis, and here we are saying that you can't bank it. Now what we have is we're creating a multi-pronged problem with backdooring with cash, not only with those that sell it because they have to store that cash themselves, which can make them vulnerable, but also makes it more cartel activity is likely and we can't track anything based the rules that we have in banking. I think it's common sense, so that's where I stand on it.