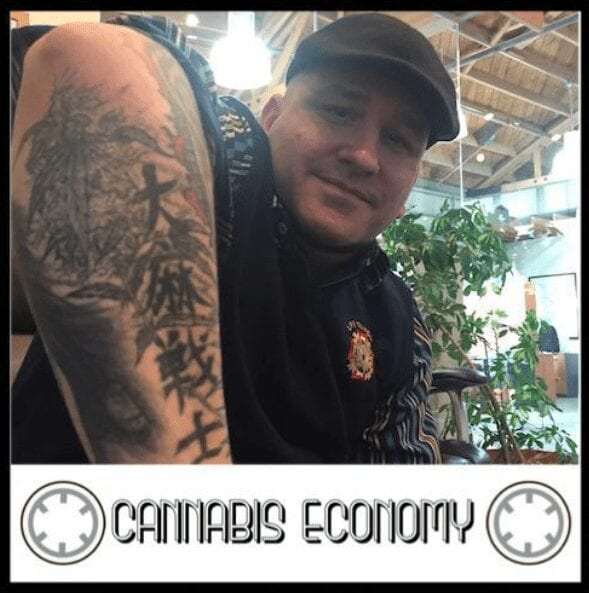 September 1, 2016
Etienne Fontan runs the storied Berkeley Patients Group in Berkeley California. It’s right up the road from Oakland which is East of San Fransisco if you’ve never been…or looked at a map of the region. Etienne takes us through his history which coincides quite nicely with the history of the cannabis movement. Listen for stories focused on Jack Herer, Ed Rosenthal, Steve DeAngelo and one of BPG’s founders Debby Goldsberry among others.

Speaker 1: Eitenne Fontan
Speaker 2: and if you were wondering how to pronounce it, that's how at the end, run to the store in Berkeley patients group in Berkeley, California. It's right up the road from Oakland, which is east of San Francisco. If you've never been or looked at a map of the region, welcome to cannabis economy. I'm your host Seth Adler. Check us out on twitter, facebook, instagram, and youtube channel with the handle can economy. That's two ends in the word economy. We've got the new cannabis economy APP in itunes. You can get us through the itunes podcast APP and Google play. Eddie and takes us through his history, which coincides quite nicely with the history of the cannabis movement. Listen for stories focused on Jack [inaudible] and Rosenthal, Steve D'angelo and one of the bpg founders, Debbie Goldsberry, among others. That truck reversing in the beginning is only for a moment.

Speaker 1: How I want to start is I want to make sure that I and everyone else on earth understands how to pronounce your name. That's a fun with Etienne Etienne. Yes. Fontana, Fontana, Fontana, Fontana. So that doesn't sound. That sounds very americanized. Yes, uh, well actually the Basque spelling for Fontana, which is fountain or Fontaine in the French spelling, but found Fontanne is the uh, the best, but at the end. Yeah, it's definitely very French, very funny name. Okay. Comes from southern Louisiana. Southern Louisiana. That's the question. It's not France. No. And I'm from New Orleans, born and bred as we say no, but wouldn't you say New Orleans and Orleans? Yeah, when I, when I go there and needless to say because I'm still a season ticket holder to it because I love him. And you have the two tattoos as I have flirted Lee's on the base of both my palms.

Speaker 1: That's amazing. Yeah. So we've got a little bit of a beeping back here because we are in bpg headquarters, is that right? We are here at the corporate offices and actually that's a fedex truck. Oh, that's just a fad. Extra backing. And however you may occasionally hear train go by because we are right next to the train tracks every go. Um, you, how would you describe your role at bpg today? Before we get in the wayback machine? Uh, currently I'm a director at Berkeley patients group, came to Ppg and 2002 after running a opg oakland patients group, and then I'm managing Ed Rosenthal's operations for a few years. I'm like, good friend, Debbie goldsberry asked me to come into Berkeley patients group and assist her with a gross situation that they had at the time and unfortunately was in an unforgiving area and there is really nothing I could do, so I had management experience.

Speaker 1: So I came in pretty quickly and started in the weight room, a wing, a things down to the grams eighths and ounces and then worked my way all the way up to. I'm currently a director at Berkeley patients, so I've worked myself from the bottom to the top. Perfect. You name checked a couple of very important people, which we're going to get into. There was also a dog barking. We need to introduce the dog. Oh, that's holly. Holly is the shop dog. Basically our fedex protector. Excellent. Yeah, it's needed. Absolutely. In these days and times, I'm Ed Rosenthal, master grower. How would you describe who had Rosenthal is if someone listening doesn't know who that is and has been putting out grow books since the mid 19 seventies and is the most successful independent publisher to my knowledge in the United States because the topic of a cannabis has been, uh, so exclusive and was so stigmatized over the generations that it was the only outlet.

Speaker 1: So back when I was on canned cannabis action network tour, going around doing rallies, teachings, tourists in 47 states, we had ed's grow books, we had male France grow books. We've had that information out there to get out to the people because back then it was a only ordering from high times to get that book information because you couldn't go into most bookstores, much less a gross shop and get that information. And most people were afraid that you were going to end up on a list. Isn't that funny how paranoid we were and now today it's a reality. Yeah. And you're a marketing director. Victor was just telling me about all of the data initiatives that you have. So we've come a long way certainly. Oh, absolutely. I mean, we've come by leaps and bounds, but needless to say that that pervasive fear and warmongering that the drug war basically perpetuated.

Speaker 1: It caused such a tremendous fear that there was no access for people to gain information. Um, so we were on literally on the front lines distributing that information because we had high times magazine which was at that time the only magazine dedicated strictly to cannabis. We would have hemp products. Um, we had the old Jack career shirts with the ditch, you know, hemp facts on the back, which usually had a different print on the front, but all the same did, you know, facts, you know, one acre of hemp will save, you know, four acres of trees, et Cetera, et cetera. So, um, we were doing direct action by being out going to a college campuses and just touching directly base with people. And Ed was one of the earliest supporters of Debbie goldsberry and can, they had come to my university in 1989. Muntjac Herrera, not ed, but ed had his books and for you know, with the situation and Debbie, the original kind of bpg person or persona, Debbie was one of the founders of Berkeley Patients Group along with Don Duncan and Jim Mclellan.

Speaker 1: Jim Mclellan passed away unfortunately due to AIDS complications in 2001 we didn't know at the time, but he wanted a greater place where he could pass but a place that people could be respected. And uh, I was a gulf war veteran. I'm a combat veteran and I sustained injuries and was diagnosed with Gulf War syndrome. And which is ptsd essential oil. Well, it's one of it as well as nerve damage and all kinds of other fun things. Nausea, migraines. I had lesions on my feet for nine years. That wouldn't go away. Awesome. You know? Yeah. So I was told that was all in my head and I was crazy. And when I, I was kicked out of the military for positive peer analysis after my doctor recommended it's use and I lost all my benefits. And then when I went to the Va and told them I used medical marijuana, they physically removed me from the va facilities in four different ones around the United States because I was a known drug user and because I admitted my marijuana use, I was a willful known drug user and therefore it could receive no benefits and was physically removed.