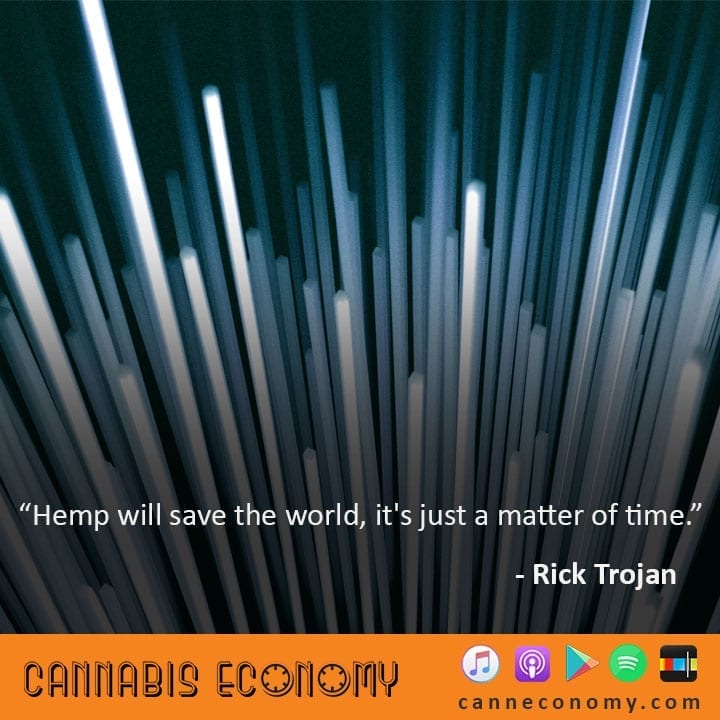 Rick Trojan and Morris Beegle on independent agriculture “Farming, manufacturing are subsidized with all sorts of incentives. We don’t need that with hemp. Other countries, China? They’re killing it on the fiber side. 90% of what Canada grows, we eat. So the market’s there, we’re just don’t have the infrastructure yet. But it’s coming.”

Seth Adler: First, Rick Trojan, and then Rick Trojan and Morris Beegle join us. All of these interviews were recorded throughout 2018 with the passage of the Farm Bill, or the Hemp Bill, it seems appropriate to release them now.

Seth Adler: Cannabinoid deep dive, CBC, and CBG a public service announcement from Steep Hill. Cannabichromene or CBC, is non-psychoactive like CBD, and has been shown to be about 10 times more effective than CBD in treating anxiety and stress. It also displays efficiency in treating inflammation, pain relief, and is both anti-viral and anti-tumor. CBC has also been shown to stimulate the growth of bone tissue. Cannabigerol or CBG is also non-psychoactive, and has been shown to stimulate the growth of new brain cells, including in the elderly. It should be noted that genuinely neurogenic compounds are extremely rare. CBG also stimulates bone growth, is anti-bacterial, and anti-tumor, and combats insomnia. Go to steephill.com/canneconomy for more information.

Rick Trojan: Yeah, that's kind of the overall entity that we focus on.

Seth Adler: Alright, so I told you that I wanted to spotlight hemp and you said, "Okay."

Seth Adler: So let's start with The Road Trip I guess. As you said, folks kind of best know that. Only for the past two years it seems like, what a long strange trip it's been right?

Rick Trojan: It's been incredible, we literally had our second year anniversary in Iowa last week. We talked with a bunch of legislatures on the Hill for a state bill that we think we can pass. Which is interesting 'cause it was only two years ago we were there for the presidential primaries, and the first guy would refuse to shake my hand because I was a hemp farmer and he though he would test positive for marijuana, and he had a commercial drivers license. To only be there two years later ... I mean the fight's been going on for years, but we made a lot of progress in two years for sure.

Seth Adler: And the Hill being Washington, DC.

Rick Trojan: In Iowa, the Capitol in Iowa.

Seth Adler: The Capital of Iowa. And so what does a bill look like from Rick's perspective?

Rick Trojan: Well the joy of our country is there's 50 states and there's probably going to be 50 different state bills. So some of the best bills allow farmers to utilize the stalk, the stems, the roots, and the seed which have never been a controlled substance. So utilize that even if the plant goes, it's called hot, over 0.3%. So places like North Carolina, that's great, places like Vermont, they charge $25 and you plant whatever you want. So the regulations are very minimal. As they should be on a commercial crop.

Rick Trojan: So I think people ... We testified the other day here in Colorado, on using cannabis stock from the marijuana plant as fiber in carpet, and those sorts of things, and it didn't pass out to committee. So there's still that fear of THC.

Seth Adler: So it didn't pass out of committee. Here's what I don't understand. What I do know, is that cannabis is a schedule one substance. But I also know that there's the farm bill that states that hemp before it goes hot as you say, under .3 is legal. So how can it not pass out of committee if this is a legal thing?

Seth Adler: Well that's ... you and I agree, what I'm saying is, as far as the text, the Hemp Bill declassifies .3 and under.