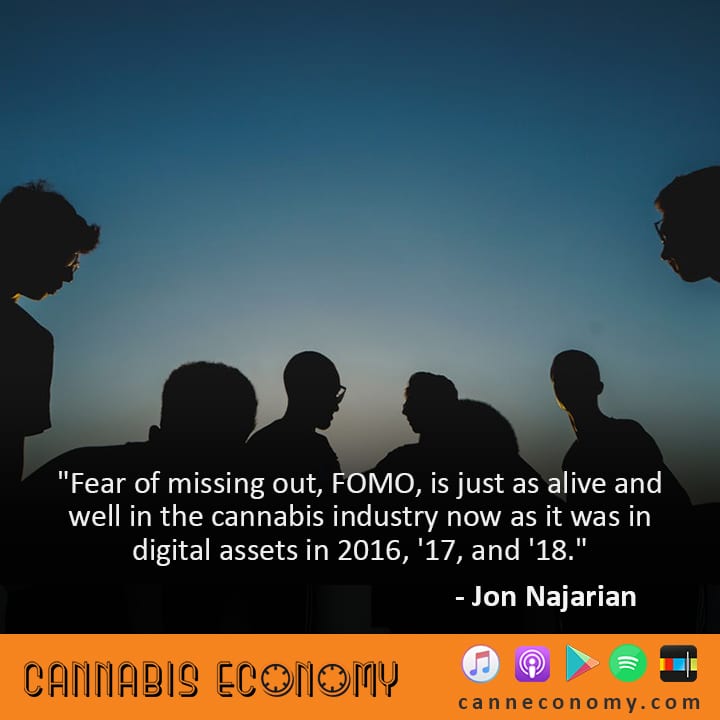 Jon Najarian joins us and shares insight into market volatility related to the Cannabis industry: “Whenever we see something, whether it’s Cannabis related, whether it’s a drug going through FDA approval, whether it’s Aids, cancer, Alzheimer’s, whatever it might be, there’s a lot of speculative paper around that. With Cannabis, it’s just the Wild West. They can’t bank right now. But if you have a federal charter, you’re not touching money from a Cannabis company.”

Seth Adler: Jon Najarian joins us. Welcome to Cannabis Economy, I'm your host, Seth Adler. Download episodes on canneconomy.com. That's two Ns and the word economy. A ton of direct insight up on canneconomy.com. First, a word from Wana Brands and then Jon Najarian. Want to know with Wana Brands, next we've been talking about global expansion and really other industries are starting to realize that Cannabis is an industry of innovation.

Speaker 2: Yes, I think that's going to be one of the major trends that we're going to see over the next couple of years. Is somebody said to me recently that we're moving from bro science to grow science, which I love. But I think that we're getting a lot more sophisticated about the plant itself, how to extract more specifically, how to separate the various Tirpitz and cannabinoids and how to recombine them in different ways. Additionally, you're going to see a lot of people working for different ways to increase bio-availability to make sure that more of the THC and other substances from the plant get into the body efficiently. I think just in terms of the plant itself, we're seeing a ton of innovation. Then I think we're seeing a lot of innovation from ancillary businesses that support.

Seth Adler: Jon Najarian, what organization do you traditionally affiliate yourself with?

Jon Najarian: Well, let's see, Seth, I'm co-founder with my brother, Pete, of Investitute, which is a website where we've got subscriptions and education, and of course, I work with CNBC every week talking about what's going on in the stock market.

Seth Adler: Yeah, and you couldn't help but notice what's going on in the stock market is starting to be Cannabis?

Jon Najarian: Exactly, and that's why Seth and I are on a plane-

Jon Najarian: I really got pushed into the space by both greed and a friend, David Sieberg, over at Cowen and Vivian, one of the big analysts over there. David was helping me understand exactly what was going on in the space, how big it was going to be. I had another friend, Todd Harrison, who's with CB1 Capital. Todd had also pushed me towards the space but I really got involved, Seth, just before Tilray came public.

Jon Najarian: Yeah, about six months before Tilray came public, which I didn't get on the IPO, by the way.

Jon Najarian: But I bought it right after the IPO.

Seth Adler: All right, so then let's just track that up and then we'll come back to the beginning.

Seth Adler: There was a little bit of an explosion, so to speak, right?

Jon Najarian: Yeah. If memory serves, it came public at around 19 bucks, vastly undervalued at that level. I did not get in on the IPO. It's a good thing, I guess, because I would have flipped it probably. But instead I bought it in the low 30s because it almost immediately popped into the low 30s, and for the work that David had done we thought that it might see into the low 50s pretty quickly. I was willing to, like I say Seth, the greed took over. There, of course, weren't any options or anything, it was just instead a stock play. But I bought it in the low 30s and it couldn't have been more than two months later. One day, I'm walking through CNBC and all of a sudden I knew it had traded over 100 and I was pretty giddy about that.