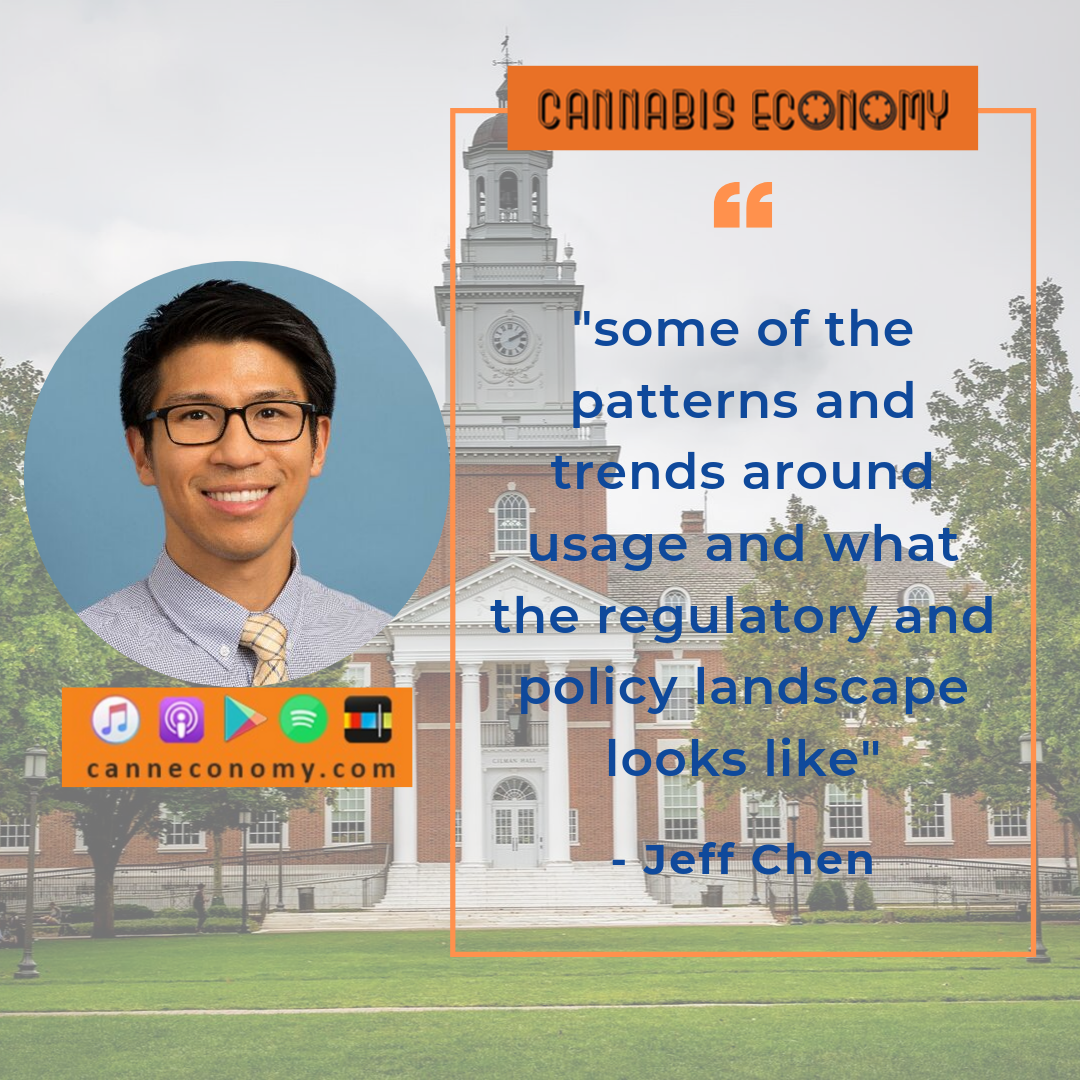 Jeff Chen, Director of the UCLA Cannabis Research Initiative, has learned that “the average physician really is, in many ways, powerless to navigate the healthcare system.” Because of this, Chen decided that the best way to change the system was to learn the business side of it as well. Chen also notes that, even today, the endocannabinoid system is not being taught in medical school, as it is a very long and difficult process to change med school curricula. Luckily, UCLA is currently doing a rehaul of their med school curriculum, so Chen is hoping that this will provide an opportunity to insert some cannabis content. Chen wants future doctors to understand “some of the patterns and trends around usage and what the regulatory and policy landscape looks like” and hopes for more double-blind placebo-controlled studies in the very near future.

Seth Adler: Jeff Chen joins us. Welcome to Cannabis Economy. I'm your host, Seth Adler. Download episodes on canneconomy.com, that's two Ns and the word economy, or wherever you currently get your podcasts. We've got plenty of direct insight from scientists like Jeff Chen on canneconomy.com, either video, the written word, or audio like this very podcast. A word from MedMen and then Jeff Chen.
Seth Adler: MedMen is the most recognizable cannabis retailer in the US with operations across the country and flagship stores in Los Angeles, Las Vegas, and New York. Recently, MedMen entered Florida for the first time, the third-largest medical cannabis market, where the company is licensed for 35 total stores. It's all part of MedMen's impressive footprint, which currently spans 86 licenses, including pending acquisitions. Learn more about how MedMen is creating a safer, happier, and healthier world at medmen.com.
Seth Adler: Jeff Chen gets an MD and MBA at the same time from UCLA?
Jeff Chen: Yeah, it's called-
Seth Adler: I'm starting right there.
Jeff Chen: Yeah. It's called Asian tiger parents.
Seth Adler: Asian tiger...
Jeff Chen: They're really good at... No.
Seth Adler: Did they also conceive of this idea for UCLA for the institution itself?
Jeff Chen: Oh, God no. If anything, they were complete anti, opposite all this, but they've come around. They realize that it's a normal thing now.
Seth Adler: Were they anti the business part of it?
Jeff Chen: They were a little bit. They thought it would be a distraction from my pursuit of being a physician.
Seth Adler: A proper physician, right?
Jeff Chen: Correct. Right.
Seth Adler: A medical doctor. That's what you should have done.
Jeff Chen: Correct.
Seth Adler: This MBA stuff is malarkey-
Jeff Chen: Correct.
Seth Adler: ... as far as Mr. and Mrs. Chen are concerned.
Jeff Chen: Exactly, yeah. What I realized was that the average physician really is, in many ways, powerless to navigate the healthcare system, the insurance companies, the suppliers of everything from the devices to the pharmaceutical companies. They're this kind of cog that's kind of stuck, and there's-
Seth Adler: These very smart people that-
Jeff Chen: Incredibly smart-
Seth Adler: That could do a lot.
Jeff Chen: ... hard-working, good-natured people-
Seth Adler: Are handcuffed.
Jeff Chen: ... are handcuffed, and they don't even know exactly how they're handcuffed. They're just kind of stuck in this system. One interesting thing, for example, doctors can't unionize because... and go-
Seth Adler: Well, neither can regular people anymore in the United States of America.
Jeff Chen: Well, right, right, right.
Seth Adler: That's a different podcast, Jeff.
Jeff Chen: Right, but yeah.
Seth Adler: Is it part of the Hippocratic oath that they're not allowed to-
Jeff Chen: Pretty much.
Seth Adler: Okay.
Jeff Chen: Because if you ever were to walk out on your job to demand better wages or better hours or changes in regulation, people die, so doctors are not allowed to unionize. It's unfortunate that there's so many other financial interests in the healthcare system that want things to stay the way they are. What-