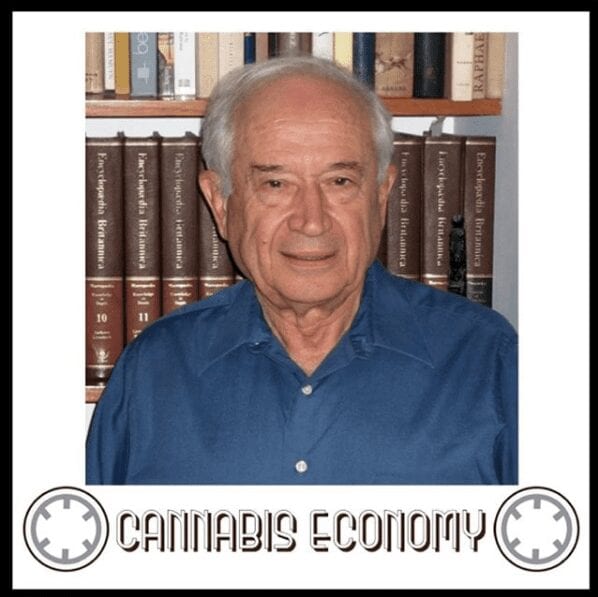 The Copernicus of Cannabis, Dr. Raphael Mechoulam joins us to discuss the advent of cannabis research, it’s history and current landscape. He says it’s very difficult to work on compounds, that are under legal constraints. When he started there was some knowledge around cannabinoids but it was vague and not in modern terms. As a natural products chemist he knew that the first thing that needed to be done was to elucidate the chemistry as you can’t do research with an unknown extract. He read historical information on the plant in many different languages to set his baseline understanding. This eventually set him up to be the custodian of the world’s supply of legal THC in 1963 which at the time was 10 grams and the rest as they say, is history.

Speaker 1: The Copernicus of cannabis. In celebration of episode 2:50, Dr Raphael Mechoulam joins us to discuss the advent of cannabis research. It's history and current landscape. He says it's very difficult to work on compounds that are under legal constraints. When he started, there was some knowledge around cannabinoids, but it was vague and not in modern terms. As a natural product chemist, he knew that the first thing that needed to be done was to elucidate the chemistry. As you can't do research with an unknown extract, he read historical information on the planet in many different languages. To set his baseline understanding, this eventually set them up to be the custodian of the world's supply of legal thc. In 1963, which at the time was 10 grams. Walk into cannabis economy. I'm your host Seth Adler. Check us out on social with the habit can economy. That's two ends of the word economy. Rafi Michelen. So here we are. We're in Hebrew University.

Speaker 2: So Eh, when I started working on cannabis was many years ago, it was one of the projects that we stopped at that that time I started. I'm a natural product chemist. I work in natural products and compounds that are found in plants or an animal that basically compounds that are found in plants because every family of plants has different types of chemicals at times. Not always different types of chemicals. The no, the, the family supplant. So the thousands, many hundreds of thousands of compounds and many of them have been used as a medicine for, for ages and others we don't know the structure. We don't know what did they work. And one of the blonde side decided to work on what's kind of the. That's my kind of first question. And uh, Dr Michelle dot Professor Rafi. Thank you for having me. And this is an honor. It's a pleasure.

Speaker 3: Um, how did you. Yes. You. Okay. You're working with, uh, the, you know, with plant medicine, but what are we talking about? Nineteen 60. What are we talking? The three. How did you come to cannabis? No one is looking at cannabis at that time. Right. How did you find cannabis? Well, the story's complicated. You see, morphine had been isolated from opium, a 150 years previously and cocaine had been discovered in the 19th century from coca leaves seem strange. Did the active compound had never of cannabis had never been isolated in pure form, although in the thirties and early forties, some very good groups and worked than that in, in the US. Roger, Adam, so well known chemists in the UK, a lot toward in Oxford had worked on that and got a Nobel prize, done something else, but then work stopped and for various reasons, some of them are legal.

Speaker 3: It is very difficult to work with compounds, do research and compounds that are under legal constraints. Indeed. And I mean universities in open, open place, the lab people come in, students come in, students go out, you cannot have a, uh, a policeman standing in front of the door and so on. So essentially when we started work, there were very, very few groups. There was one in Germany that was working a little bit and that was about it. So, uh, Eh, there, there was some no lich under chemistry of cannabinoids, but it was vague and not on the modern terms. And uh, when we started work, Eh, I knew as a natural product chemist that first we have to elucidate the chemistry and the reason for that is you cannot do research with and they extract that. You don't know what it's in there. That's not modern science.

Speaker 3: You'll have to have a identified compounds, pure compounds. Do you know what you're giving to the mouse or rat? I thought it's a good idea to go ahead and, uh, uh, we got cannabis from the police. This is a, I want you to tell the story of the bus. But before, as far as you know, finding cannabis, was it because you were studying natural products and you had heard about cannabis through your discovery of other plant medicine? Is that basically it? Well, no, it's a little bit more than that. A cannabis of course had been known knowns. The research had been done on it. It was, there was no more reach in the thirties and forties. But, uh, there was, and there were a lot of, uh, uh, publications, old publications, the describe the cannabis as a treatment is cannabis as a recreational drug. Cannabis in many, many different forms.