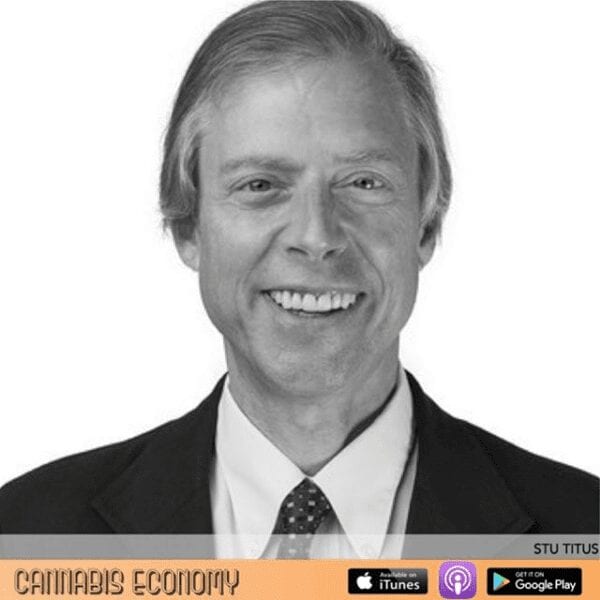 A PhD in the field of physiotherapeutics, Stuart Titus joins us and shares his experience treating patients as he says more in the British style than the US style of therapy. He continues, here in the US if you need surgery, you’ll be in the operating room tomorrow morning. But in other countries it’s as much as an 18 month wait so you have to do a lot to keep a patient comfortable and under control until they can get into the operating room. Stu shares that athletes and professional sports teams utilize this type of therapy. Athletes would come into his office in the offseason and that’s where he found out about cannabis. His patients were using cannabis to control pain, reduce inflammation and help with sleep issues- and he was intrigued.

Speaker 2: a phd in the field of physio therapeutics. Steward Titus joins us and shares his experience treating. Patient says he says more than the British style than the u s style of therapy. He continues here in the US. If you need surgery, you'll be in the operating room tomorrow morning, but in other countries it's as much as an 18 month wait, so you have to do a lot to keep the patient comfortable and under control until they can get into the operating room. Skew shares that athletes and professional sports teams utilize this type of therapy. Athletes would come into his office in the off season and that's where he found out about cannabis as patients were using cannabis to control pain, reduce inflammation and help with sleep issues, and he was intrigued. Walk into cannabis economy. I'm your host, Seth Adler. Check us out on social with the handicapped economy. That's two ends and the word economy. Stu Titus, do I call you Dr Titus? Oh, I call

Speaker 1: you up either way. I mean it was very formal maybe at the beginning of the precinct. You know, whatever Dr. Steel is just fine. Okay. Right. Well, let's make sure we understand this, this and his phd, his phd degree of what, of what I was a phd in the field of physio therapeutics, so I treated patients, pain, injury rehabilitation, more in the British style than the US style of physical therapy. Well, let's go ahead and break that down right now. You know, because we've got the folks that listen, understand cannabis and its issues as far as the science as far as the technology, as far as the practitioning of medicine. We'd love to know a little bit more. So when we talk about the British style versus the American, what do you mean? Well, I'm talking about physio therapy, just the way that it's been taught and utilized. Now, many of these physio therapists, uh, in overseas countries really now, you know, here in the US, if you have an injury and you need a surgery, you'll probably be in the surgical room tomorrow morning.

Speaker 1: But many people overseas, it's an 18 month wait. And so as a physio therapists, you have to do a lot to keep that patient comfortable under control. Utilizing a limb or whatever to the best of their abilities until they can get in the operating room for that necessary surgery, so we learn a little different techniques and technology. We utilize them, what you might find in traditional physical therapy here in the US. Got It. Because I was a practitioner of this style and many sport teams, they're athletes on season, we'll get this type of therapy, but I was practicing with the general public and there were only a handful of practitioners such as myself doing this for the general public or the general. Basically lot of athletes in the off season would come into my office and here I found out about cannabis because almost to a person, I mean all the contact sport people were using cannabis to either control pain, reduce inflammation, help with sleep issues, and I was so impressed with the number of people using this.

Speaker 1: I said, my Gosh, okay, maybe there's some real science. Let me attend one or two of these medical cannabis symposiums. And one idea was that this was. This was going back to the mid 19 nineties. Early on. Yeah, very early before we even had a regular cannabis says symposiums, uh, here in theu , s which really started about 1998. Sure. But over time, I mean, the research on these cannabinoids are the extracts from the cannabis plant family. Absolutely incredible. I was blown away. I didn't even realize the US government, for example, held a patent on the Nih side, the therapeutic use of cannabinoids. Six, six, three. Oh, five. Oh, seven patent the oxidants, neuroprotective and all the research going on around the globe. I was just absolutely astounded. And Public Company started out in March of 2009 in California Medical Marijuana Inc. I became involved just as an investor to start with, but over time have taken on an increasingly large role with the company.

Speaker 3: AlrIght. So, you know, getting, getting back to the patent, right. Uh, when you learned about that and realized how it's squared with the fact that cannabis is a schedule one substance here in the United States and elsewhere, what did that make you think as a practitioner of medicine? Seeing patients come in knowing that cannabis was helping them, realizing that we've got it scheduled one way, but we also have a patent for it to be medicine as the federal government. W w, what did your mind do?

Speaker 1: Well, I was immediately appall because my gosh, with a huge amount of research on these cannabinoids, I, I was just absolutely dumbfounded. You know, why we're not actually doing this and that we're all really being lied to with this, you know, unfortunate war on drugs and uh, thinking that cannabis is the most evil substance on the planet. And when you study the endogenous cannabinoid system and plant based cannabinoids and how they react and you say, my gosh, these are absolutely vital and necessary nutrients for the optimal health performance of the human body. You say to yourself, how can this possibly be? And the fact that now for three and a half generations, we've all been cannabis or cannabinoid deficiency, we see the unbelievable increase in disease and pathology throughout the globe. I mean, you know, it's just kinda goes hand in hand. We're all basically cannabinoid deficient